Retracing Sections of the Ulster & Delaware

My plans were to head down to Stamford NY and spend the day riding the Catskill Rail Trail, but... it was hotter than hell! With temperatures in the mid 90s and lots of humidity it was a heat advisory day!

Interestingly, on the way, I had to wait for two long freight trains at a crossing. What I observed epitomizes the changes in freight trains since I was growing up. Rather than seeing a mixed consist of boxcars, flatcars and tankers, etc. the first train was entirely containers and the second train was entirely automobile cars. The second train seemed to last forever and must have had 150 trains cars or so...Wow! 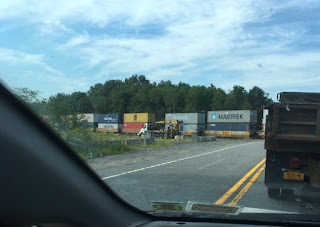 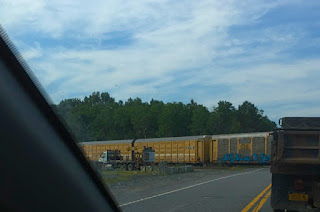 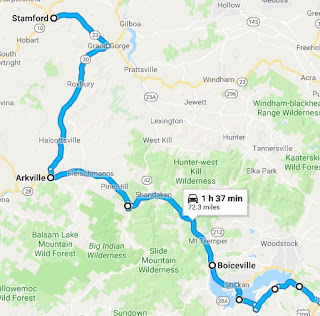 Once I got Stamford--before finding the train station--I checked out the ROW going east and saw that it was primarily wide open... thru farm fields with little shade. Once I found the station and stepped out for a short walk, I decided not to ride. It was hotter than hell - I am crazy but not suicidal!
I drove on to Grand Gorge and headed south to Arkville. Along the road I did see the ROW and in may places it looked like it could be a shady, pleasant ride although its grass not gravel.

Arkville is home to of course the Delaware & Ulster Railroad - a scenic tourist train that embraces 26 miles of the former Ulster & Delaware ROW. They only run on weekends but I sauntered about the yard and was impressed - it looks like a successful business! 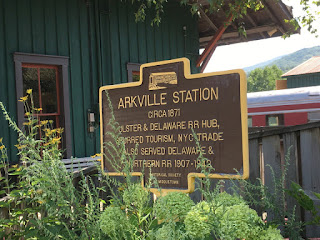 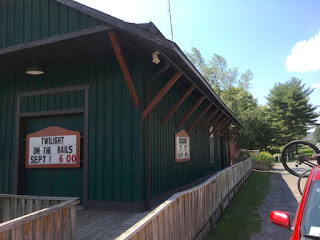 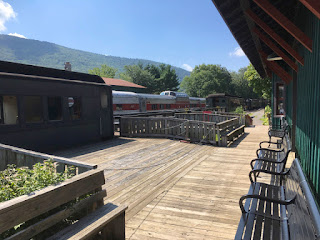 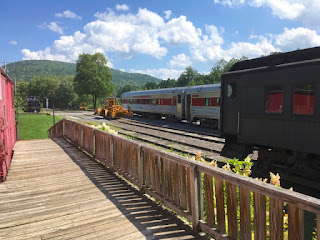 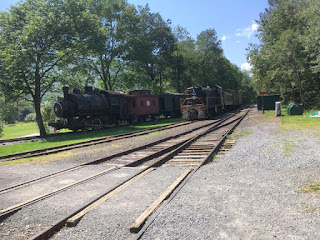 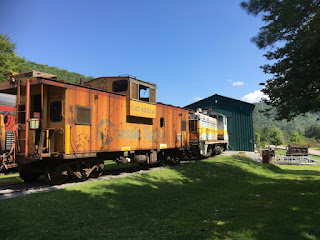 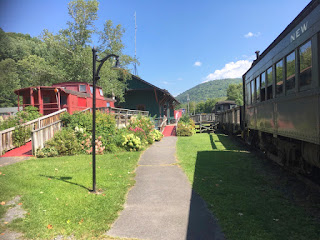 My last stop was a rewarding one. I even climbed up to the embankment to observe the rails still in place! 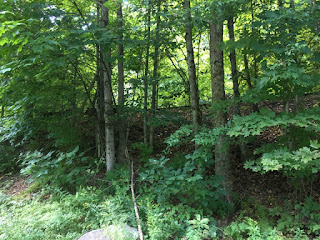 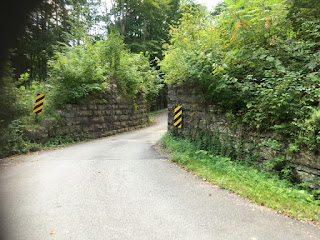 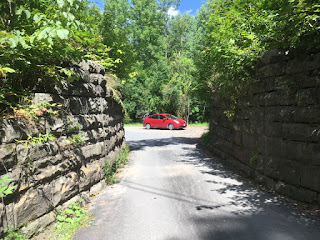 The Ulster and Delaware Railroad (U&D) was chartered in 1866 as the Rondout & Oswego, and reorganized in 1872 as the New York, Kingston & Syracuse, it became the Ulster & Delaware in 1875, and was completed to Oneonta in 1900. Called the “Up & Down” by locals... stiff grades, horseshoe curves and babbling mountain brooks made the railroad a picturesque scenic ride and key to the development of much of the Catskill economy.

The railroad thrived into the World War I era, especially on tourist passenger traffic, milk, and coal, and began to fade with the coming of the automobile and the truck in the 1920s. The line later become the Catskill Mountain Branch of the New York Central and was finally abandoned in 1976.

U&D's peak passenger year was 1913, with 675,000 passengers carried. The last regularly scheduled passenger train over the former Ulster & Delaware Railroad (U&D) tracks was operated between Kingston and Oneonta by the New York Central Railroad on March 31, 1954. The tracks were then cut back to Bloomville in 1965 to make way for construction of Interstate 88 near Oneonta. The Hubbell Corners-Bloomville segment was abandoned and the railbed was later converted for use as the Catskill Scenic Rail Trail. [Credits: Trainweb and U&D Railroad Historical Society]