After a hot but magnificent mountain bike ride in Waterbury in the morning,  the weather turned cloudy and rained at lunchtime. Once the rain subsided, I thought I'd take it easy and ride a rail trail rather than mountain bike again.

A few years back I took a kayak trip with relatives on the Lamoille River. We went under an abandoned railroad bridge, Today’s biking designation was actually another bridge nearer to Morrisville.

I didn’t get started until mid afternoon and the sky was gray and sketchy the whole time. Fortunately it didn’t rain! I started my trip from the Morrisville Station.

Morrisville to the Bridge

I captured a bit of the ride while holding my camera with one-hand... 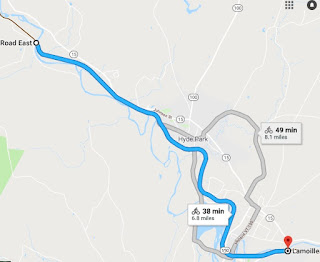