After visiting the Batten Kill Trolley Piers (previous post - Part Two), we headed over to Greenwich and stopped at the Argyle Brewing Company. It was a fantastic place. Gary and I tried their beer sampler and it was served in a carved log - how cool is that! 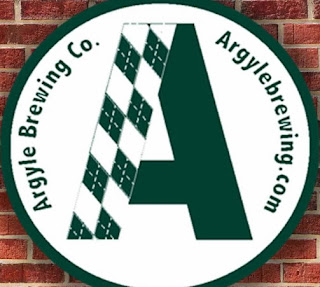 Darren joined us for the trek up to Moses Kill! He recommended a pizza place north of town for a quick lunch and then we drove back on Rt 29 and up Rt 4 (rather the Rt 77) to continue our exploring. 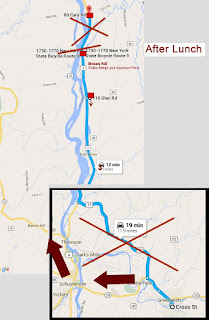 http://binged.it/1PZYObi
This stop was a bust. Although the remnants of the old canal were discernible, the Trolley ROW was completely overgrown.  At least I did find a railroad tie in the bushes...

All the planned ways in to the old bridges were plastered with no trespassing signs so we trekked in legally thru incredibly overgrown swampland/thickets on the north side of the Kill. It was tough going but the reward was great! :-)

The old Champlain Canal crossed over the Moses Kill on a aqueduct and the stone work was incredible. 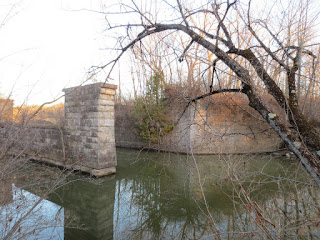 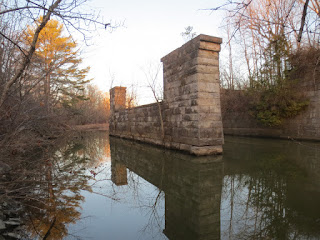 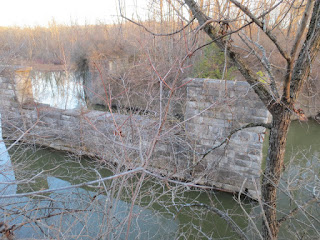 There was still an arduous trek thru the overgrowth to get to the Trolley Bridge but it was quite picturesque in the fading light. 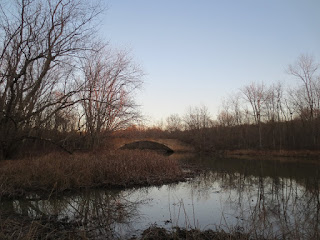 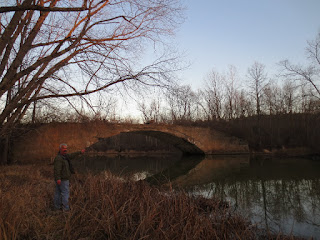 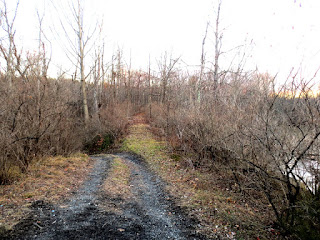 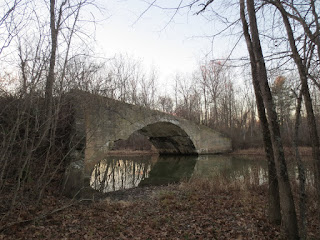 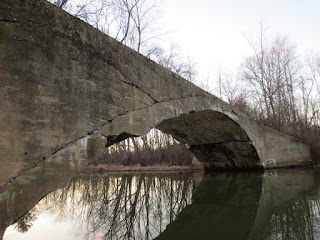 Here's a photo of it's construction
Its remarkable how much it looks like the Willow Glen Bridge outside of Mechanicville.
See Photos >

From the railroad piers over the Hudson to the relics of the Paper Mill to the bushwhacking thru the dense overgrowth to see the Moses Kill Bridges, all in all it was an rewarding adventure!


Thompson - Across the River 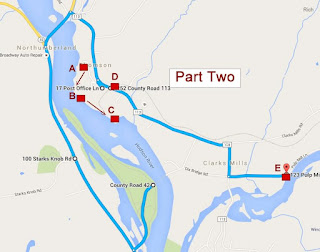 After exploring Hudson Crossing Park (previous post - Part One), we drove to Northumberland and took Route 4 across the Hudson River. We went back down Rt 113 to Thomson to sniff out any vestiges of the old paper mill.  As the historical postcards below indicate, years ago there was a small village and the paper mill was quite substantial.

A - The North End
We parked at the north end and although the bridge (Z ) was blocked, a walk to X (see photos below) unveiled a way across the sluiceway at Y.

B - At the Railroad Crossing
C - At the Trolley Crossing
It was an an impressive sight, seeing and hearing the raging river cascading around the trolley piers. Super-Short Video: 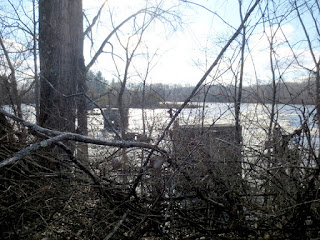 South of the Trolley Crossing there was a bit of the old paper mill still standing...

We ventured into the foundation area to explore the ruins... 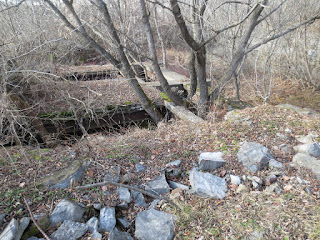 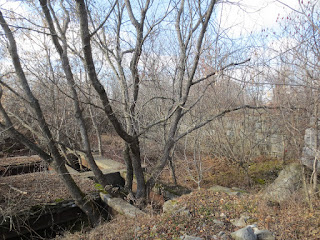 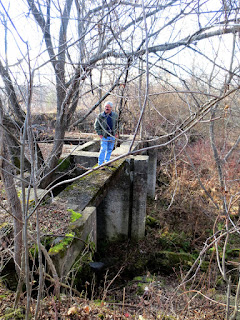 We left the foundations area and headed back north along the clogged channel which we figured was the sluiceway. The bridge I had spotted from the aerial satellite maps was for the road as parallel to it were the abutments for the trolley bridge 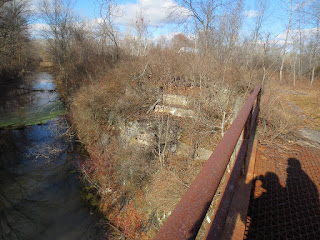 We said our goodbyes to the area and drove south towards the Batten Kill. We stopped briefly to photograph the end of the Batten Kill spur (now disused). These tracks at one point continued thru the paper mill and on across the river 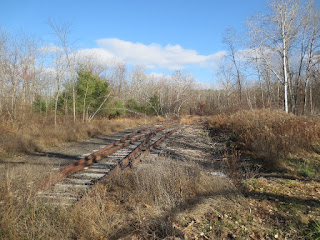 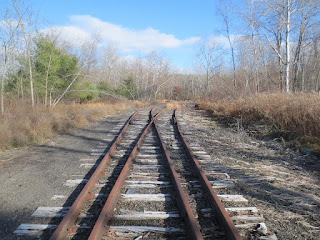 E - Piers on the Batten Kill

It was a beautiful, serene stretch of the Batten Kill where we stopped to explore the Trolley Piers. Once again, a short trek thru dense forest undergrowth was required to get to the abutment but it was stunningly beautiful in the sunlight. 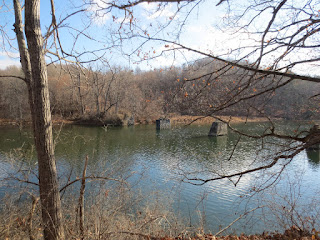 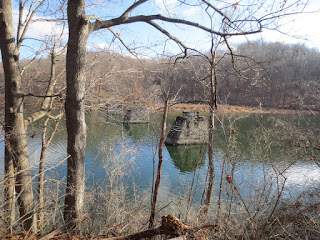 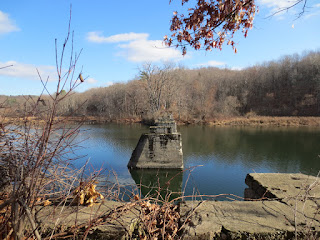 It was already after 1 pm and we were long overdue for a midday rest. We headed over to the charming town of Greenwich to visit the local brewery...


Next - Greenwich and on to Moses Kill
Continue > 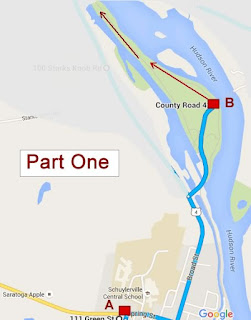 Our first stop was the B&M Station on Green Street in Schuylerville, NY.  I had visited this spot before on my Saratoga & Schuylerville Railroad trek, and thought it would be a nice spot to start the day with as it was the connecting point for the Greenwich and Johnsonville Railroad. 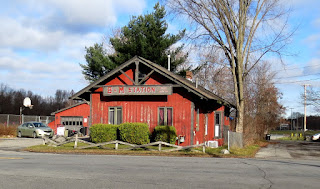 We next ventured out to the Hudson Crossing Park and hiked north to view the abandoned piers. First a little background on the train and trolley history in the area.

Around 1900 the Greenwich and Johnsonville Railroad became a subsidiary of the Delaware and Hudson Railway (D&H). Following the 1980 closure of the Georgia Pacific pulp and paper mill in Thomson, New York, the D&H planned to abandon the G&J. In 1982, Mohawk-Hudson Transportation purchased the railroad from the D&H, forming the Batten Kill Railroad.  Currently, the line running west from Greenwich to Thomson, NY is out of service but the tracks are still intact. 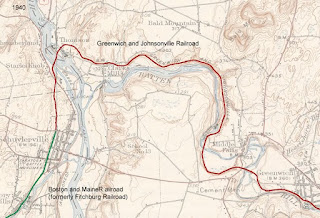 In 1895, the Greenwich and Schuylerville Electric Railroad was established. It was later absorbed by the Hudson Valley Railway. Trolleys continued to run from Greenwich to Thomson until 1928 when the tracks near Clarks Mills were washed out in a flood.

We parked near the east side of the island and walked over to Dix Bridge (now foot traffic only). Its a lovely park, chock full of trails and informative kiosks.

Hiking northward, we had ample views of both the trolley and railroad piers.
The motion of the water over the dam was mesmerizing. Super-Short Video:

About the Waterworks in this Area

Before the canal, there was a natural waterfalls in this area that became known as the Saratoga Falls. Prior to 1888, the State erected a dam for navigation purposes across the Hudson River. Due to the fact the Canal switched from the west to the east side of the river, canal boats needed to cross the river safely at Thomson and the dam helped stabilized the river. 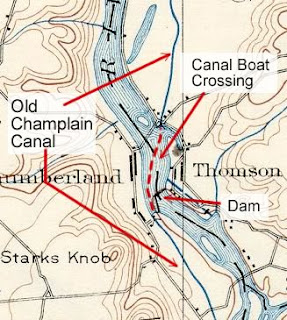 Next we headed across the river to explore the site of the old Thomson Paper Mill...