I returned to Danbury Railroad Museum today to donate a bunch of computer-related stuff that hopefully they can use for video presentations and interactive kiosks. At some point I will be assisting in these presentations.

It was very hot late afternoon but I took the short train ride they offered thru the yard and saw the turntable and pump house. The Pump in the pump house has been nicely restored.

The train stopped on the Pump House. This used to pump the water for the water tower next door (no longer there). The water tower serviced the steam engines back in the day and had spouts on two sides (unusual).

Posted by Rich Coffey at 3:32 PM No comments: 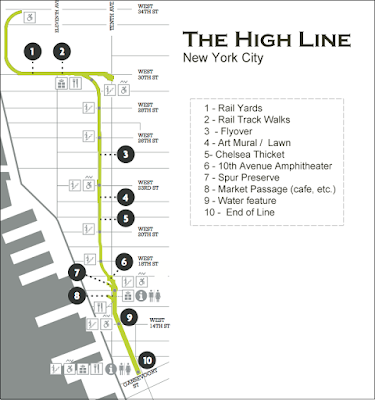 On Monday July 11th, 2016, I visited the High Line in Manhattan. This trek was truly an amazing experience and is recommended to anyone who lives and/or visits the Big Apple. The revitalization of this old railroad line into an "aerial garden" is breathtaking. 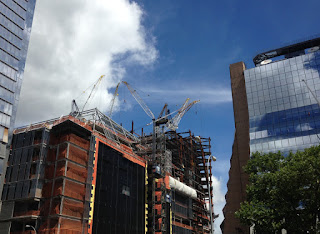 A perfect day for enjoying the High Line: sunny with a breeze - it was beautiful!
One long section is actually raised above the original rail bed and there is a closed off walkway below - this is for the gardeners who maintain the plants. 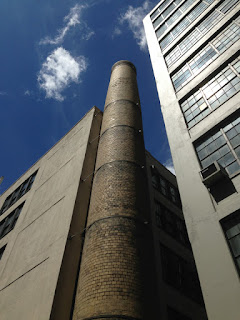 The immense amount of new skyscrapers going up all around the High Line necessitates frequent scaffolding under the construction areas. A "falling object" safety precaution.

Kinda hard to tell from the photo but up ahead is a glass window and an "amphitheater" for people watching... 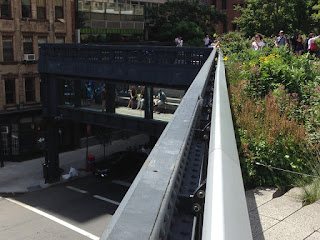 The Whitney Museum is at the end of the High Line. It has a skyview option but I didn't check it out this trip.... 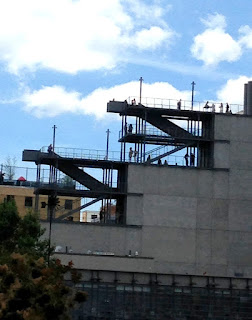 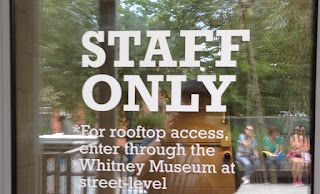 On the way back, I took a few more photos...


About the High Line


The High Line is a public park built on a historic freight rail line elevated above the streets on Manhattan’s West Side. It runs from Gansevoort Street in the Meatpacking District to West 34th Street, between 10th and 12th Avenue.


“A city that had once pioneered so many technological and urban planning solutions, that had dazzled the world with its public works, its skyscrapers, bridges, subways, water-delivery system, its Central Park, palatial train stations, libraries and museums, [currently] appears unable to undertake any innovative construction on a grand scale, and is now consigned to cannibalizing its past and retrofitting it to function as an image, a consumable spectacle.”- Phillip Lopate, director of the MFA nonfiction program at Columbia University.

Before the High Line was constructed, the New York Central Railroad had operated a rail freight line along Tenth Avenue at street level. Men on horseback (known as the “West Side cowboys”) had ridden ahead of the train with red flags or lanterns to warn pedestrians.  Despite this precaution, so many citizens had gotten run over that the street acquired the notorious name “Death Avenue.” For over 70 years, since the mid-19th century, public outcry had demanded a safer solution: thus, the High Line was built.
At the time the High Line went up, the public was turning against elevated structures, such as the “El” subway trains, because their huge looming presence created shadows that darkened the adjoining streets.

On June 28, 1934, the city and railroad held a special dedication ceremony for the new elevated route and the huge new freight station: St. John’s Park Freight Terminal. The terminal covered three city blocks, could handle 14 freight elevators, and serviced 150 trucks. The entire route, all double-tracked from 30th Street to St. John’s Park, was 13 miles long and cost more than $150 million.  The New York Central also electrified the corridor but the electric was later abandoned in favor of diesel-electric locomotives.

One unique aspect of the High Line is that it was built in the middle of the block: “in between the buildings” so to speak. Massive industrial-sized buildings could absorb a rail line running right through them and could profit from proximity for quick and easy freight deliveries.


“With the completion of the West Side Improvement, of which this viaduct is one of the more important features, West Side manufacturers, distributors and merchants in general will have transportation facilities unsurpassed anywhere. …Tenants can bring in their raw materials and ship out their finished products swiftly, safely and efficiently over rails at their very doors.”  - F.E. Williamson,president of New York Central, at a dedication ceremony for the West Side Viaduct

Although factories and packing houses did indeed congregate around and benefit from the line, by the 1960s, trucks and airplanes had cut significantly into the rail freight business and the rail line was operating deeply in the red. The southern part of the structure was soon dismantled and sadly the last freight delivery on the remaining northern part of the line took place in 1980.


“Much of the High Line’s present magic stems from its passing though an historic industrial cityscape roughly the same age as the viaduct, supplemented by private tenement backyards and the poetic grunge of taxi garages. It would make a huge difference if High Line walkers were to feel trapped in a canyon of spanking new high-rise condos, providing antlike visual entertainment for one’s financial betters lolling on balconies…”- Phillip Lopate, director of the MFA nonfiction program at Columbia University.

Friends of the High Line

Above Grade: On the High Line (Essay)
This is a great article!
A native New Yorker traces the pre-history of the High Line, and ponders whether the celebrated park will be a victim of its success.

Looking Back at The History of The High Line in NYC

Posted by Rich Coffey at 5:23 AM No comments: