Adventure on the Rails

I had a corporate trip this week where I had to fly out of Newark, NJ. I opted to take the train connections to the airport for a short adventure.

Working out of Newport that day, I grabbed the Path Train to Journal Square and then switched to the Path to Newark's Penn Station. 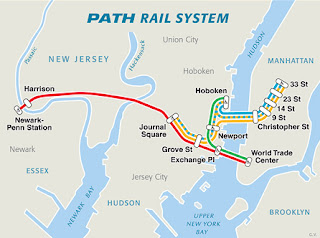 I spent a short time at the busy Newark train station and frustratingly, as I waited on the platform, trains were very crowded and delayed. 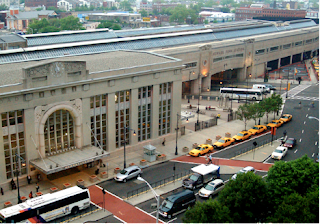 The ride was fairly quick to the station where you switch to the AirTrain to get to the airport.
The AirTrain was a monorail.  Interestingly, the AirTrain cars were actually short and functioned as separate compartments (like in Europe).

On my return I took a NJ Transit train directly to New York's Penn Station and then walked to Grand Central Terminal to get back home via MetroNorth. The NJ to NYC train ride was very quick and it is always a pleasure walking the streets of Midtown Manhattan.


Sure, some folks may think I am crazy taking the train but I enjoyed it despite the delays and crowding. It's really nice to NOT be in a car stuck in traffic and to walk a bit as well - the fresh air did me good :-)

While browsing online the other day, I came across this street view photo of a railroad crossing sign and immediately wondered: Where are the rails? Sure enough... just a few minutes using the mapping tools mentioned above and I was off on an exploration toggling back and forth between maps; retracing the now defunct railroad ROW I discovered that crossed at this spot!

If any of you have even the slightest interest in old railroads and railroad stations in Connecticut (I confess, I am somewhat obsessed with this subject :-) ) - the TylerCityStation site is an amazing repository of info. Its an unusual name for a site but the story behind the chosen name is a great story that warrants explaining. Story Details >


Quick Synopsis:
Tyler City was supposed to be a suburban metropolis nurtured by the New Haven & Derby Railroad but this 1870s railroad boom town billed as a “Gateway to the West' never really materialized. The promising two-story station burned down in 1936 and all that remains of this “dream city” is the in naming of small road in the vicinity:- Tyler City Road (location >)

My online "aerial sweep" of this ancient ROW includes the Tyler City area.

The New Haven and Derby Railroad was chartered in 1864 to run from New Haven west to Derby, Connecticut and north to Ansonia. It opened in 1871. On November 14, 1888 a 3.79-mile extension from Derby Junction to a point in Shelton was opened. Stops included Orange, Derby, West Haven, Alling’s Crossing and Turkey Hill. 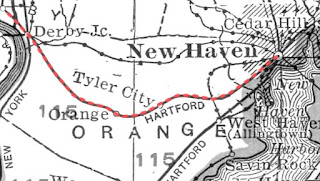 Starting near the edge of New Haven on the west--as mentioned--it is easy using aerials maps (in conjunction with the ITO map) to retrace the entire ROW.

The Railroad crossing sign in the GoogleStreet View below prompted this posting :-)

Acme Topo >
It appears this was a bridge (or trestle) abutment where the ROW crossed over the Derby Milford Road. 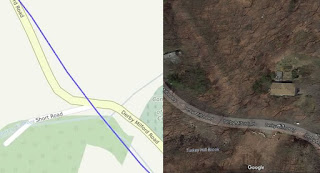