After our trek down by the abandoned trolley bridge across the Mohawk River; Gino, Gary and I drove up to the Hillside Avenue industrial complex to sniff out vestiges of the spur.

Right in the parking lot of the industrial complex is a surviving remnant of the rail spur. Intriguingly, rails were left in the pavement for just a short stretch and abruptly end a few feet later. 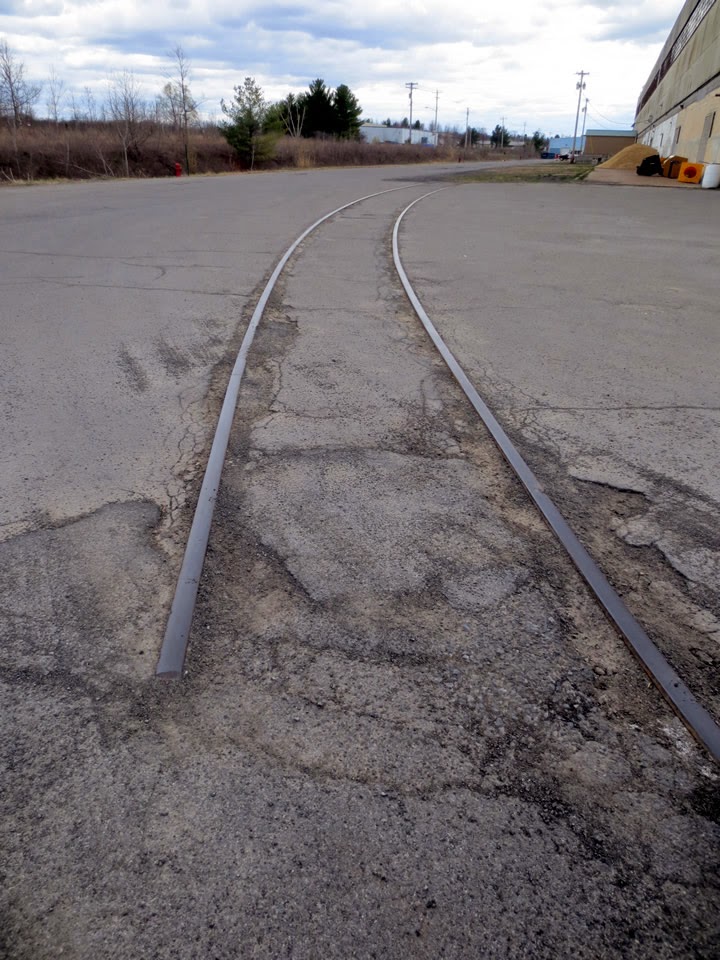 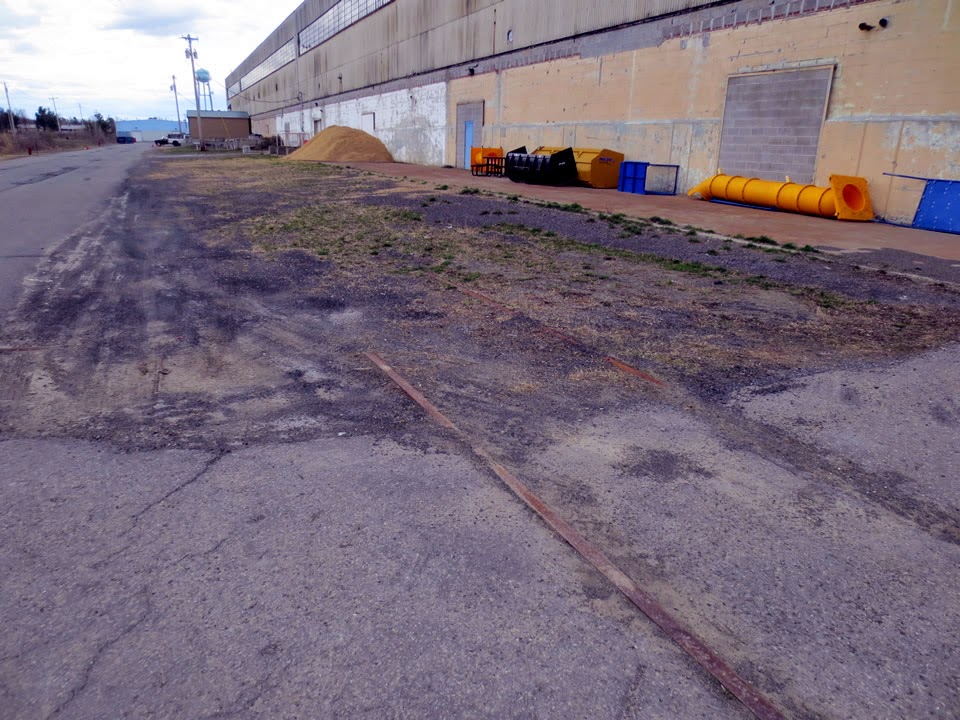 ALCO and the War Effort

It is hard to imagine now but this empty off-the-beaten path spot was once a bustling center of activity. 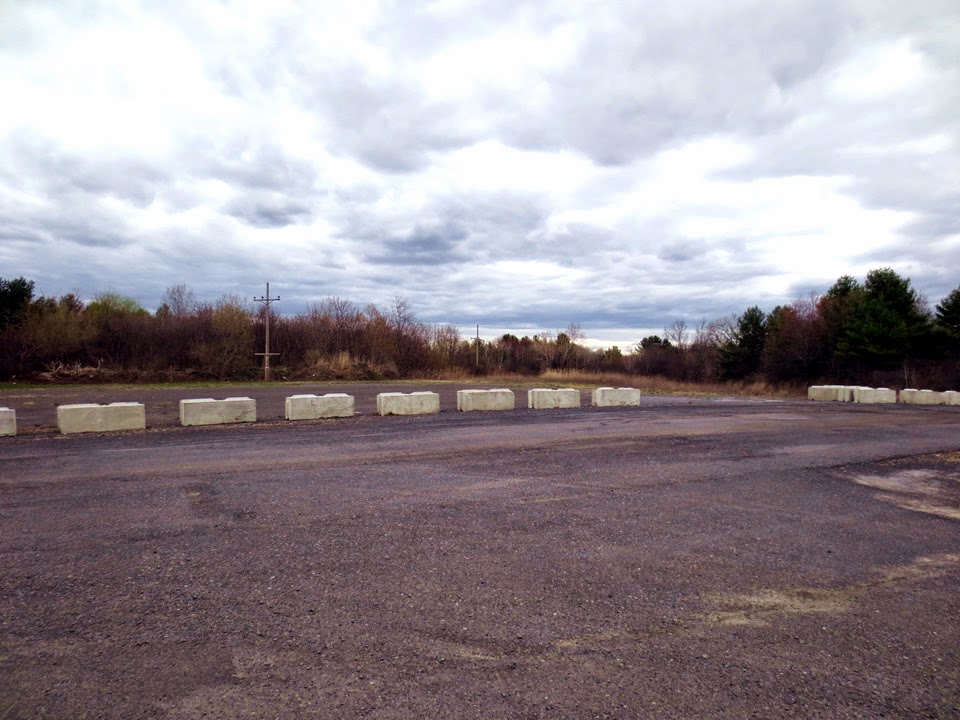 In November of 1940, ALCO was awarded a government contract to produce tanks for the war effort. In just five months, the first tank was successfully tested in front of government officials.

In 1951, this spur was built for the Korean War. Production had increased substantially and the spur was needed to transport the tanks up to testing grounds without destroying the city streets. The tanks were assembled in the huge plant in downtown Schenectady and brought by train up the spur to the test track located off Hillside Avenue. The test track is still visible in Google Aerials. When combat ended in 1953, production dropped to a trickle.

The spur was officially abandoned in 1984.  It probably last saw service in the late 60s.  It's last use was servicing the CONDEC (Consolidated Diesel Equipment Corp.) and later the Nova Bus Company that located to the former ALCO Tank site.

Near the top of the hill, the ROW cuts thru an open field. 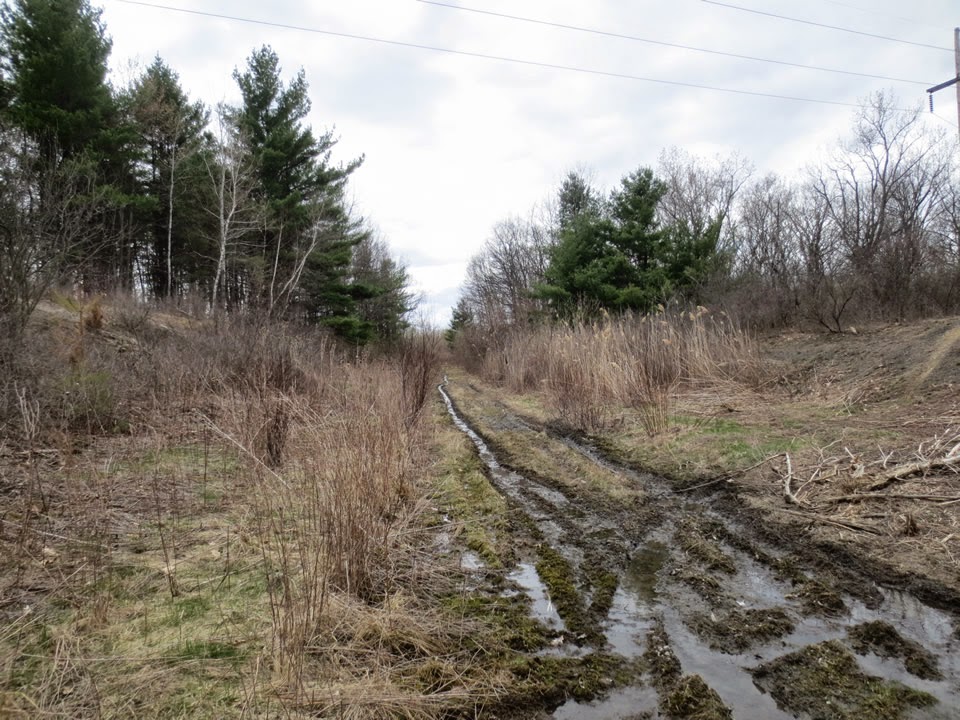 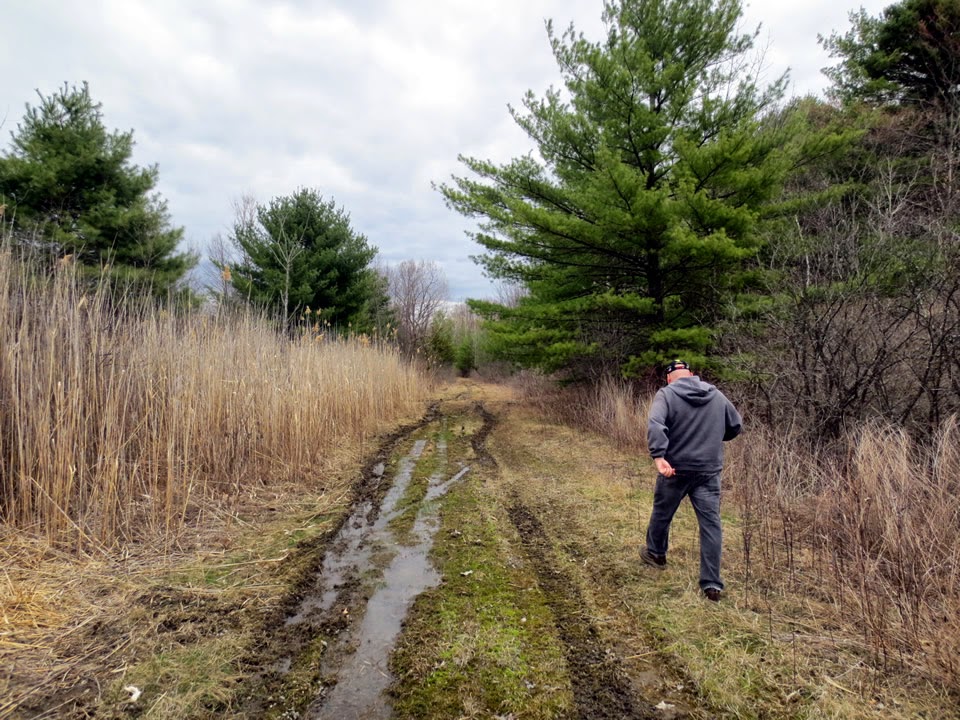 We found coal all along the ROW... 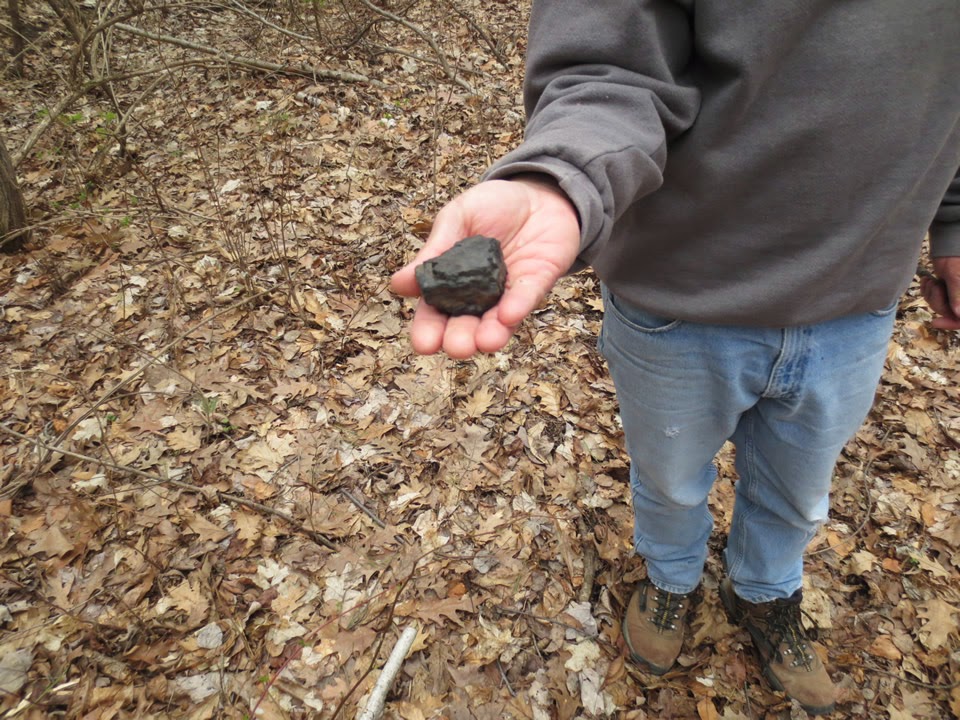 ...and even a half buried section of rail. 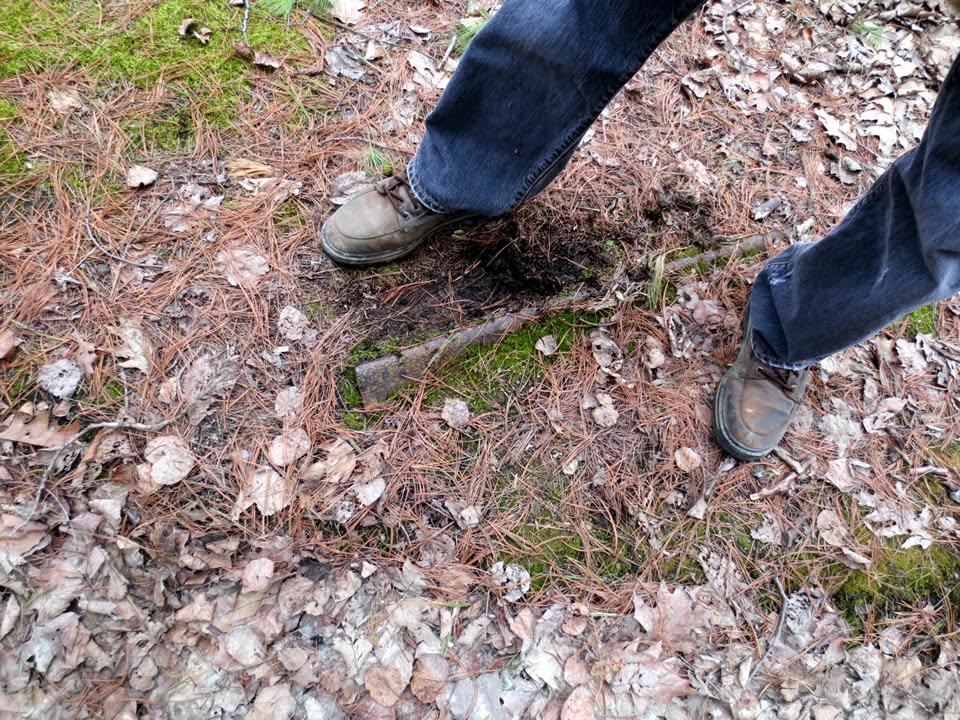 As we hiked down the ROW, it became a little more picturesque thru the woods... 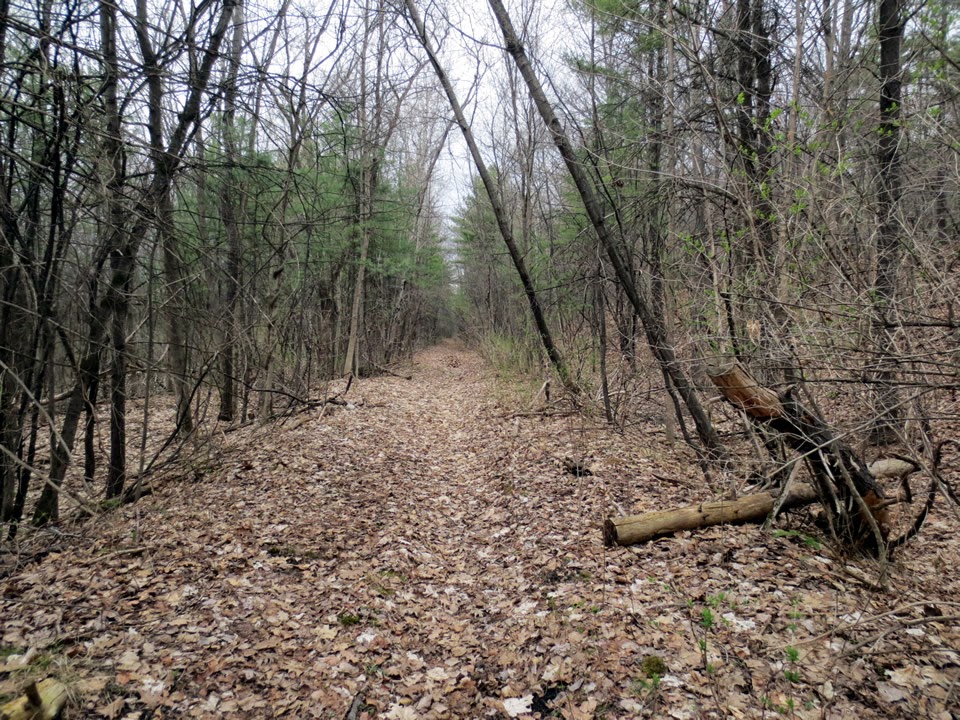 but where the soil was softer, it was carved out by water runoff. 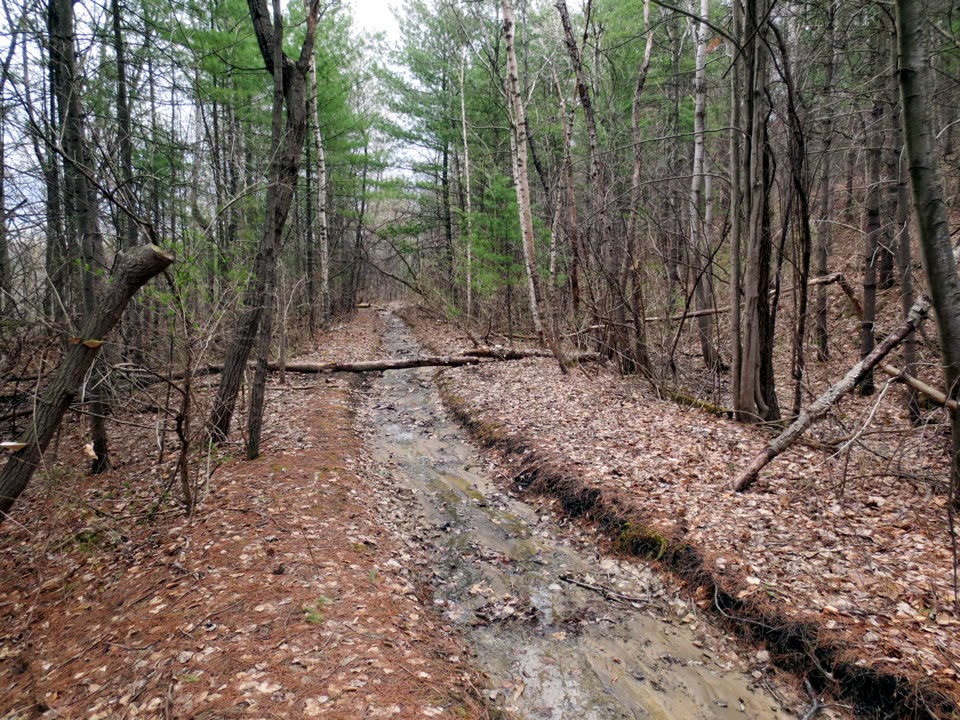 We reached the bottom... 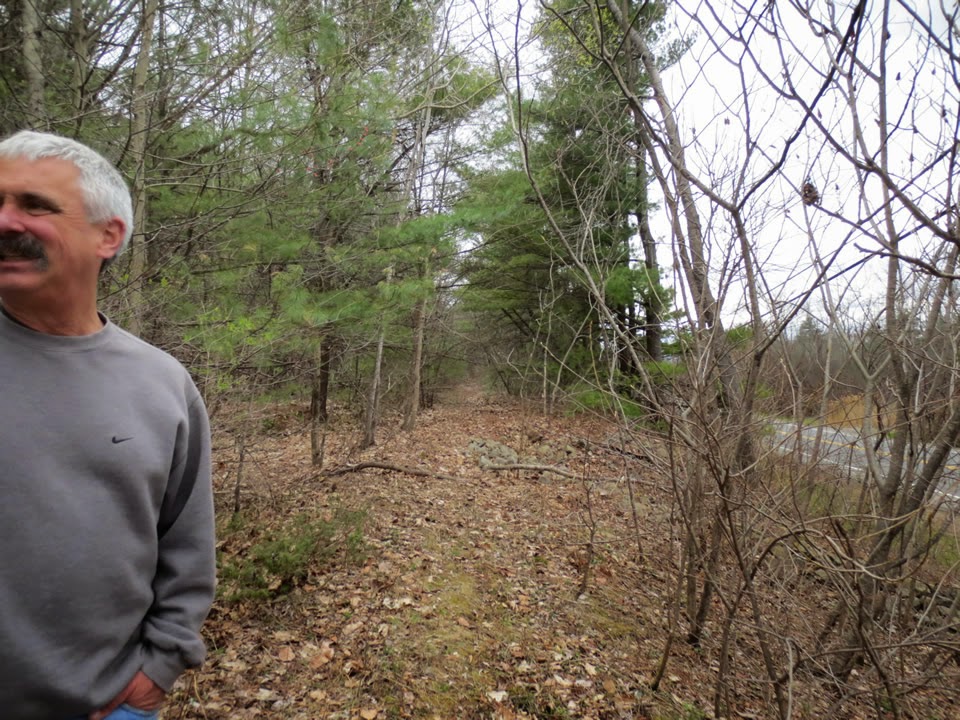 ...and Gino salvaged a tie plate along with a few S hooks (not pictured) 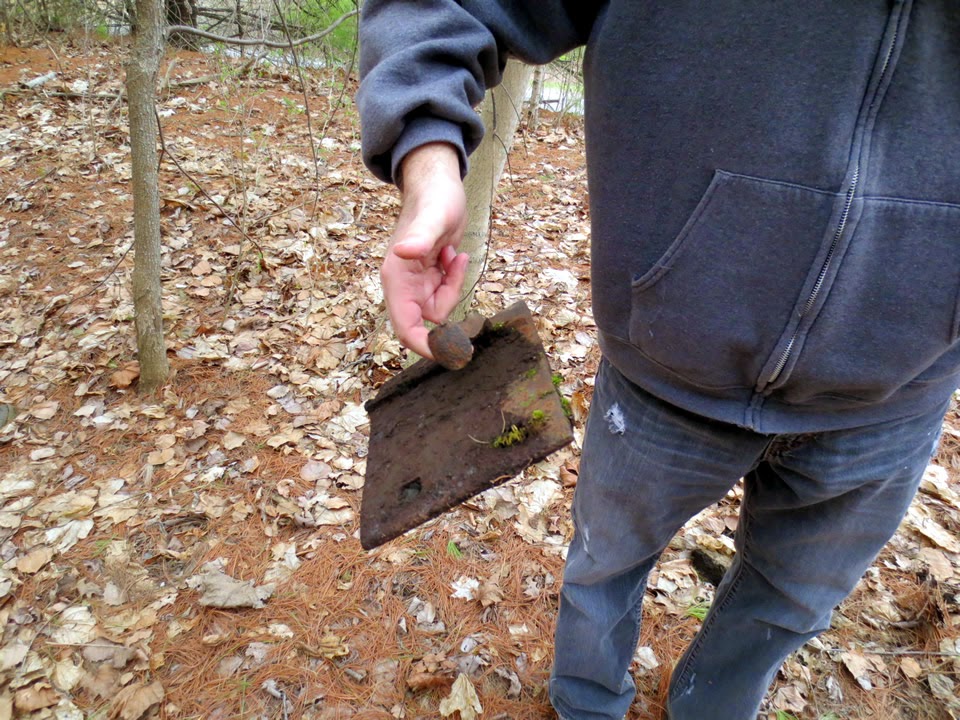 We then hiked back up to the top and found a huge stash of railroad ties. Rarely in any of our treks, do we find this many discarded railroad ties. When railroads were abandoned, they were generally bankrupt and hard up for cash. The rails and ties had monetary value and were resold for recycling. Since this spur was basically built as a government-sponsored war effort, apparently resale value of ties wasn't considered! 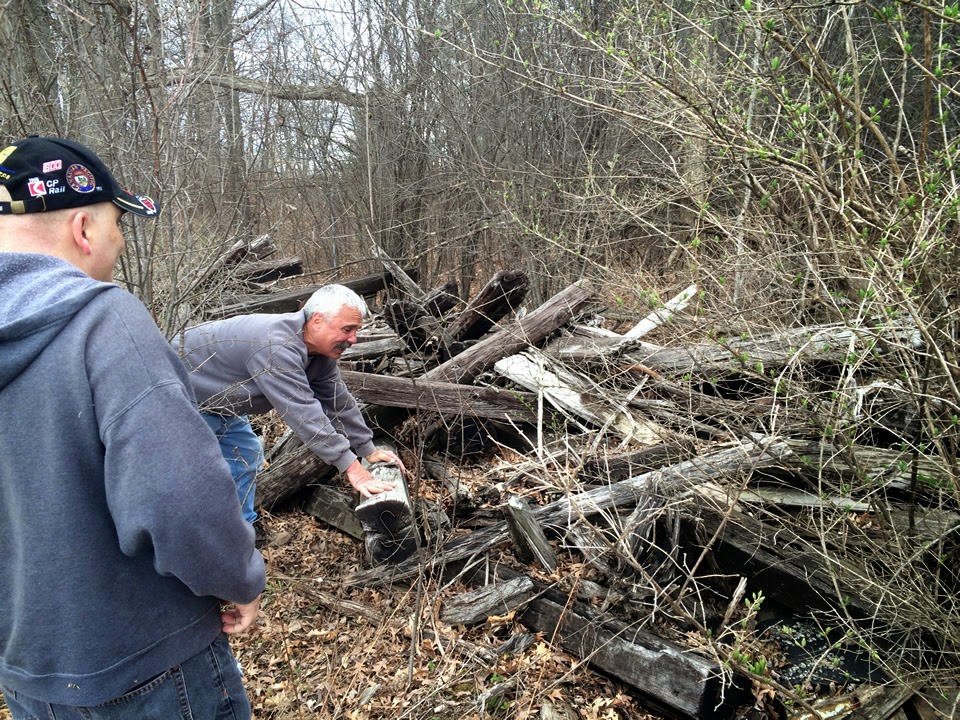 It was an enjoyable few hours out in the fresh air, exploring railroad history. Gino had a blast as well and we will be planning more RR explorations together soon!

Further Info About ALCO and the Tanks

Although I had visited this spot last winter (see The Mohawk River Trolley Bridge Ruins), this time I invited along both local railroad history expert Gino Di Carlo, as well as good friend from High School Gary Cunningham, who has accompanied me on quite a few other treks.

Gino is an expert on local railroad "archeology". He grew up in Aqueduct and explored everything train-related nearby as a kid. He was an encyclopedia of knowledge and shared quite a few interesting historical tidbits. He was great company!

We met at the Boat House parking lot and---much to my surprise--found a wide groomed path along the river at the end of the driveway. 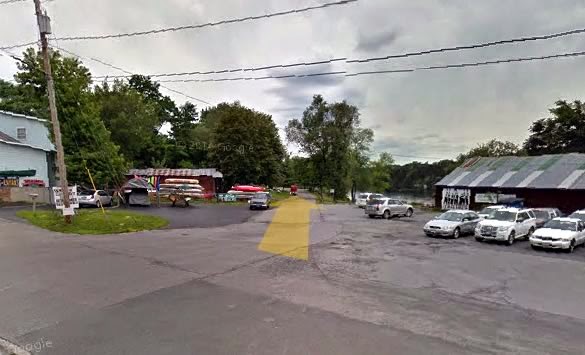 We trekked in and saw large piles of stones--rubble from the canal lining ages ago.
Once at the piers, Gary suggested taking a photo of Gino and I to show just how massive these piers are. We looked like pipsqueaks! 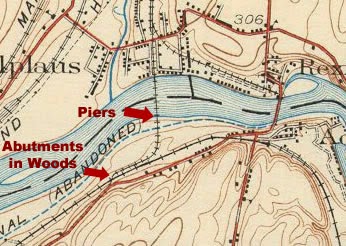 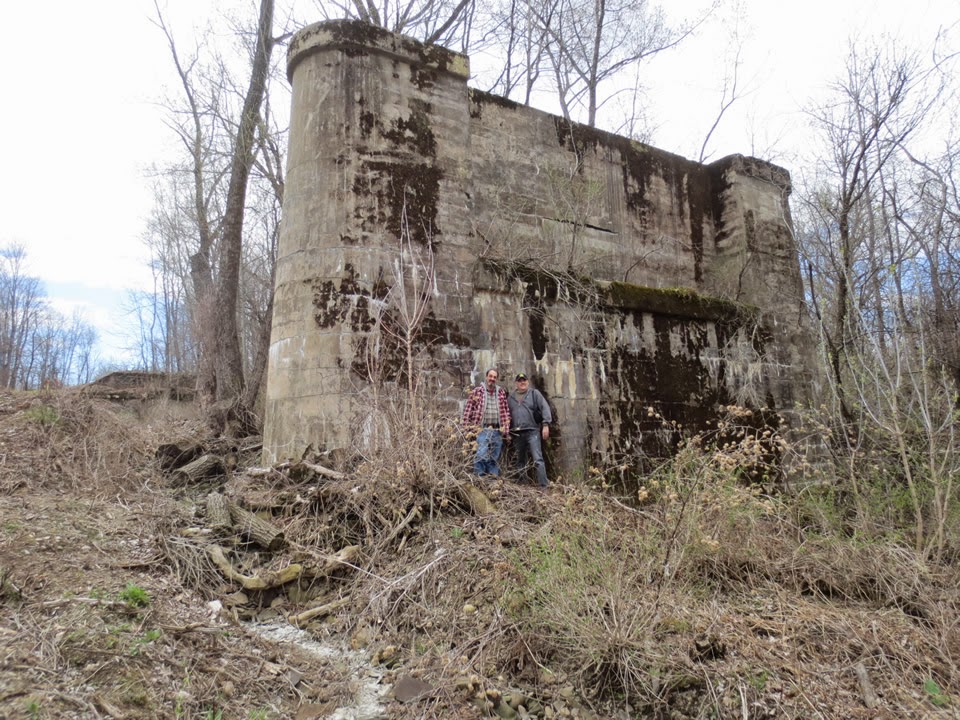 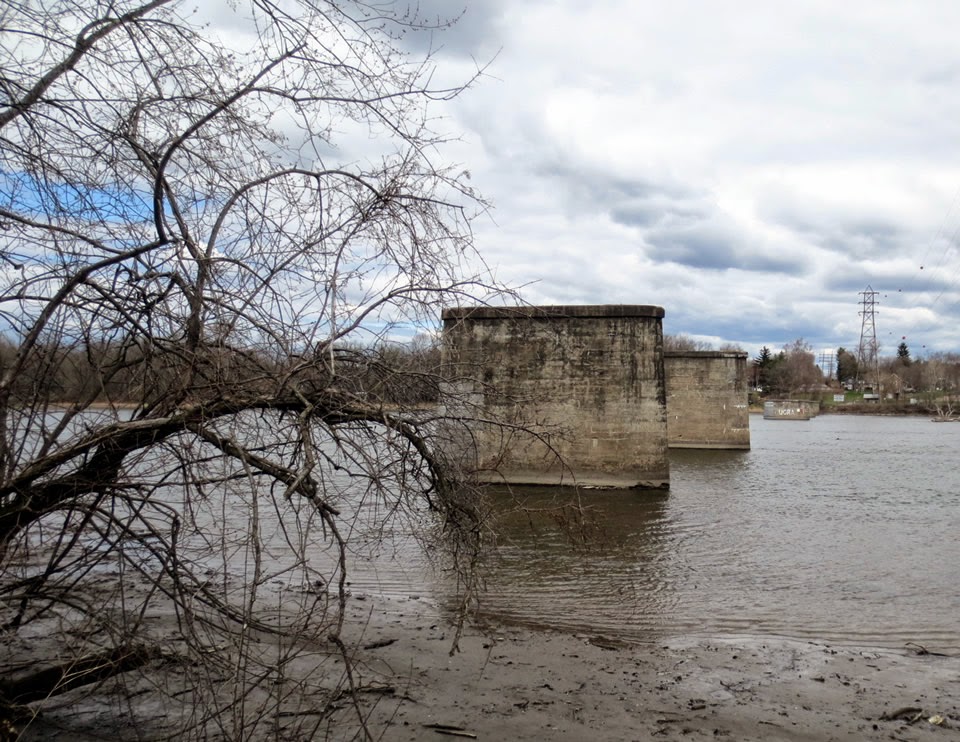 We hiked up the hill where a photo of the abutment was taken. 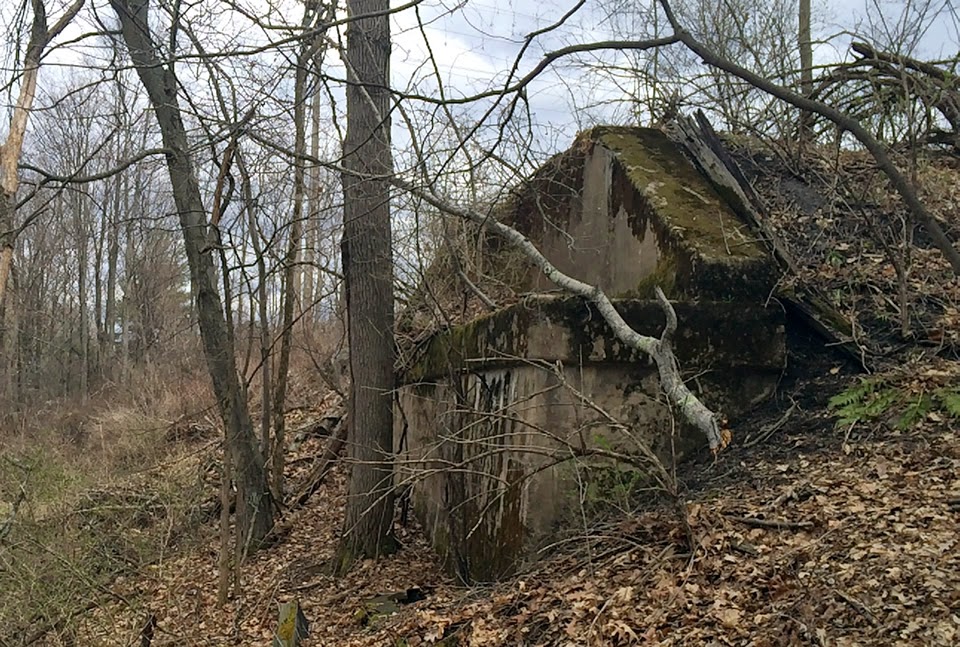 We then walked up the hill, following the gas line clearing, to the spot where the trolley once crossed the railroad, (see Mystery Ruins). For a short while,  Gino seemed lost  in contemplation of how it was yesteryear... 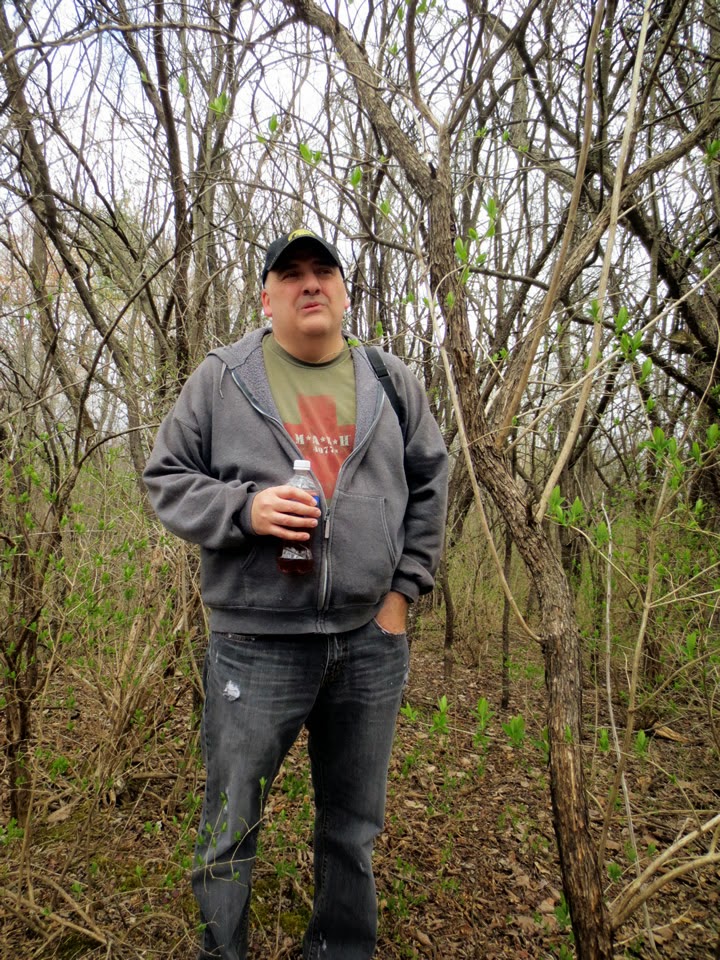 On the northwest side of the abandoned crossing, Gary encouraged a second photo op: 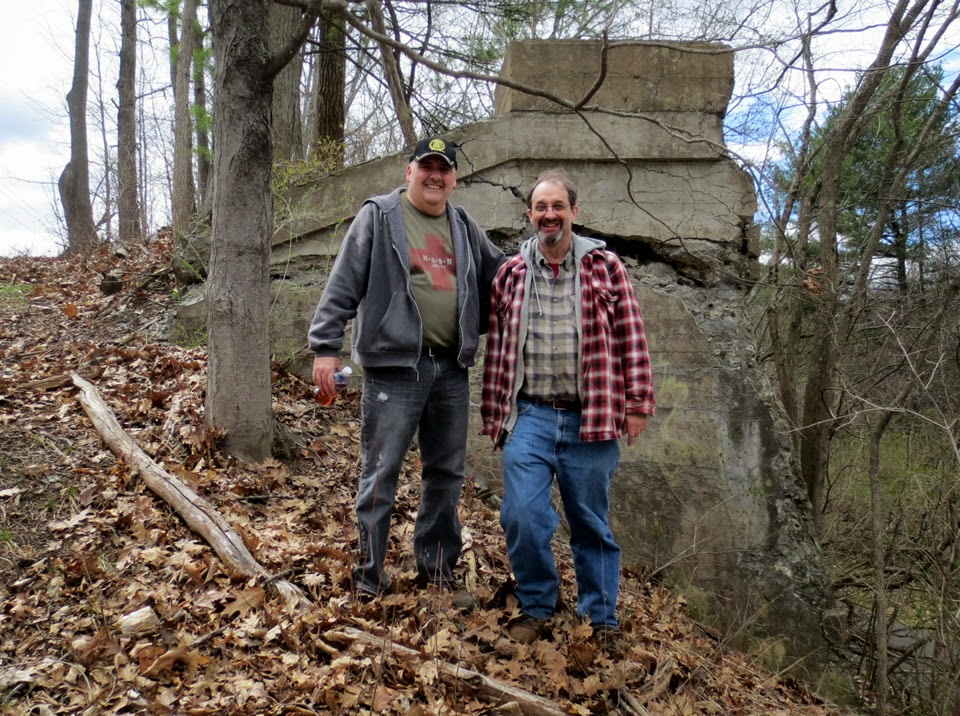