As this map indicates, the Hartford area had quite a few trolley lines in the heyday of electric streetcars. Initially separate entities, most eventually merged into one single company.

"The Connecticut Company, which by 1907 was controlled by the New York, New Haven & Hartford Railroad, operated most of the trolleys and buses in Connecticut, with fourteen divisions and, at its peak in the 1910s, a roster of over 2200 cars and nearly 800 miles of track that either ran in or connected twelve major Connecticut cities.  Ridership started to drop in the 1920s and systems were abandoned by the 1930s.  The last trolley ran on September 25, 1948, in New Haven, as the post-war boom of personal ownership of the automobile became widespread." Source: UConn Library

As highways improved and automobiles become more prevalent throughout the country, abandonments of the trolley/streetcars lines progressed steadily through the 1920s and 1930s, with only city and suburban lines remaining after 1937. By 1941, the Hartford Division was completely converted to buses.

In the late 1800s, in many populated areas across the country, trolley companies but amusement parks to increase ridership and the weekends, The owners of the Hartford, Manchester, and Rockville Tramway Company created Laurel Park on the Manchester-East Hartford border in 1895.

The Hockanum River was damned creating a lake for boating. The Park had a carousel as well as a bandstand and pavilion for Saturday night dances. Sunday concerts were held in a gazebo. The park also had a wooden observatory tower, a refreshment stand and even a zoo. The amusement park lasted until 1923 and the lake was drained in 1962. 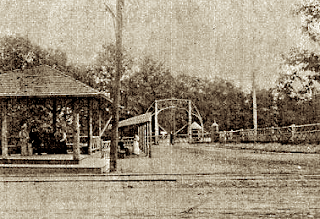