After my earlier event-filled ride at Norwalk River Valley trail,  I was up for something a little calmer. Unfortunately this hike was a little too calm! - BORING? yep but still interesting being a former rail line….

The weather turned cold and gray and certainly didn’t help my perception of the trail at all. The best thing going for it is there are a lot of locals who use the trail to jog so it’s put to good use.
The highlight of the hike was when I pulled out my camera to record how boring it was and as I turned around to film - a bunch of deer scampered across the trail further uphill - that was kinda cool!

Why didn't I bike it?

Good question! Bikes are not allowed although I did see lots of tire tracks and a teenager riding with her mother. I guess the powers that be thought that being all downhill,  bikers might get careless with their speed and clip a few joggers.

Here a bit about the railroad history:

The Danbury and Norwalk hurriedly constructed a branch to Ridgefield in 1870, in a bid to stop the town from offering financial assistance to the R&N. The branch began down the hill at the former Ridgefield Station, known ever since by the obvious name Branchville. Passenger service ran only until 1925 and the whole branch was abandoned in 1964.

Posted by Rich Coffey at 6:16 PM No comments:


Ballston Spa has an interesting history of trains and street cars. At one time, it was serviced by three trolley lines and the railroad. Now of course the large curved embankment long since abandoned by the Delaware & Hudson (D&H) dominates the landscape but there are vestiges of the trolley lines around town as well if you know where to look.

On Dev 26th, before we ventured up the Kaydeross Valley in search of the old mills, Gino DiCarlo took me on a quick loop thru town. Knowing my interest in the trolley era, he wanted to point out a few “not so obvious landmarks” of once omnipresent street car lines.

The map below illustrates the various railroad and trolley lines including the now filled in river and "the island."

A walk up the short hill on Prospect Street gave us a glance at how the Kaydeross Railroad (KVRR) came in thru the town. Bath Street was the old electric railroad’s right of way.

We strolled on by the old Tannery...
...and Gino pointed out where the Schenectady Railway (SRW) snuck across what is now just an insignificant driveway to descend onto Washington Street.
The old Hudson Valley Railway (HVRW) offices still stand proudly on Front Street but apparently the SRW wan’t allowed to connect with its competitor at this location. 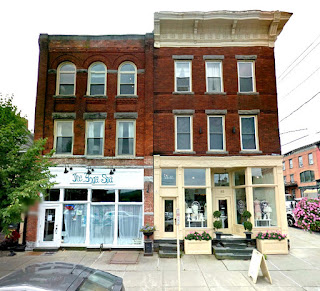 The two lines came close at the corner of Milton and Washington but never connected! Only when the D&H bought and merged them was a direct connection finally made!

What’s equally fascinating is that a sizable chunk of this area was actually an island replete with a foundry and a mill - appropriately named “Island Mill.”

What Happened to Galway Street?

Galway Street was once a rail yard.

The Paper Bag King - A Biography of George West
http://ballstonhistory.angelfire.com/west.htm