Duchess County and The Walkway Over The Hudson


Although I have been frequently biking riding and trail building since my last post, my activities were just the usual local stuff and not worth posting.

But this weekend was different! My son pleaded with me to lend him my mountain bike for the weekend so I opted to ride the rail trails east of the Hudson River instead of my usual mountain biking in Trumbull. As in previous posts, these excursions are hopefully an enlightened window into the world of yesteryear with a large dollop of railroad-related history added.

The Route
Well Friday the 4th was a bust due to all the rain but Saturday was gorgeous so I ventured up to ride the Rail Trail that connects to the now famous Walkway Over the Hudson. Three trails combined make an 18 mile ride (one way).

Hopewell Junction
I began my trek at the southern trail head at Hopewell Junction. In this small village, there is a old train station that has been painstakingly restored and turned into a lovely railroad museum. Being a train buff it was great to see all the old photos and maps as well as a large array of objects from the railroad’s hey day on exhibit and presented so professionally.

I got a personal tour from a cheerful and knowledgable guide named Jackie and lingered there for close to an hour! If you are ever in the area, be sure to pay this spot a visit - it will be well worth it! 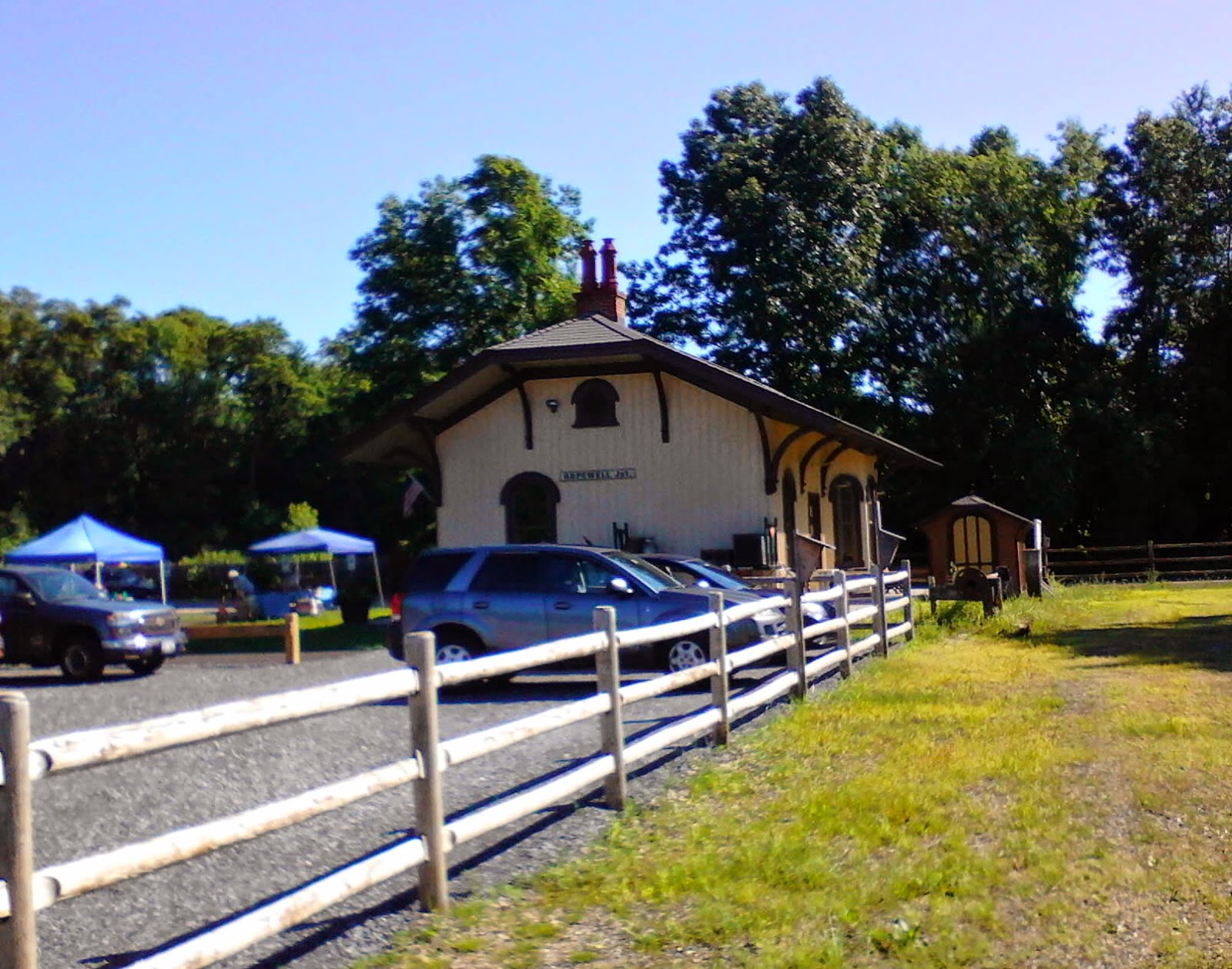 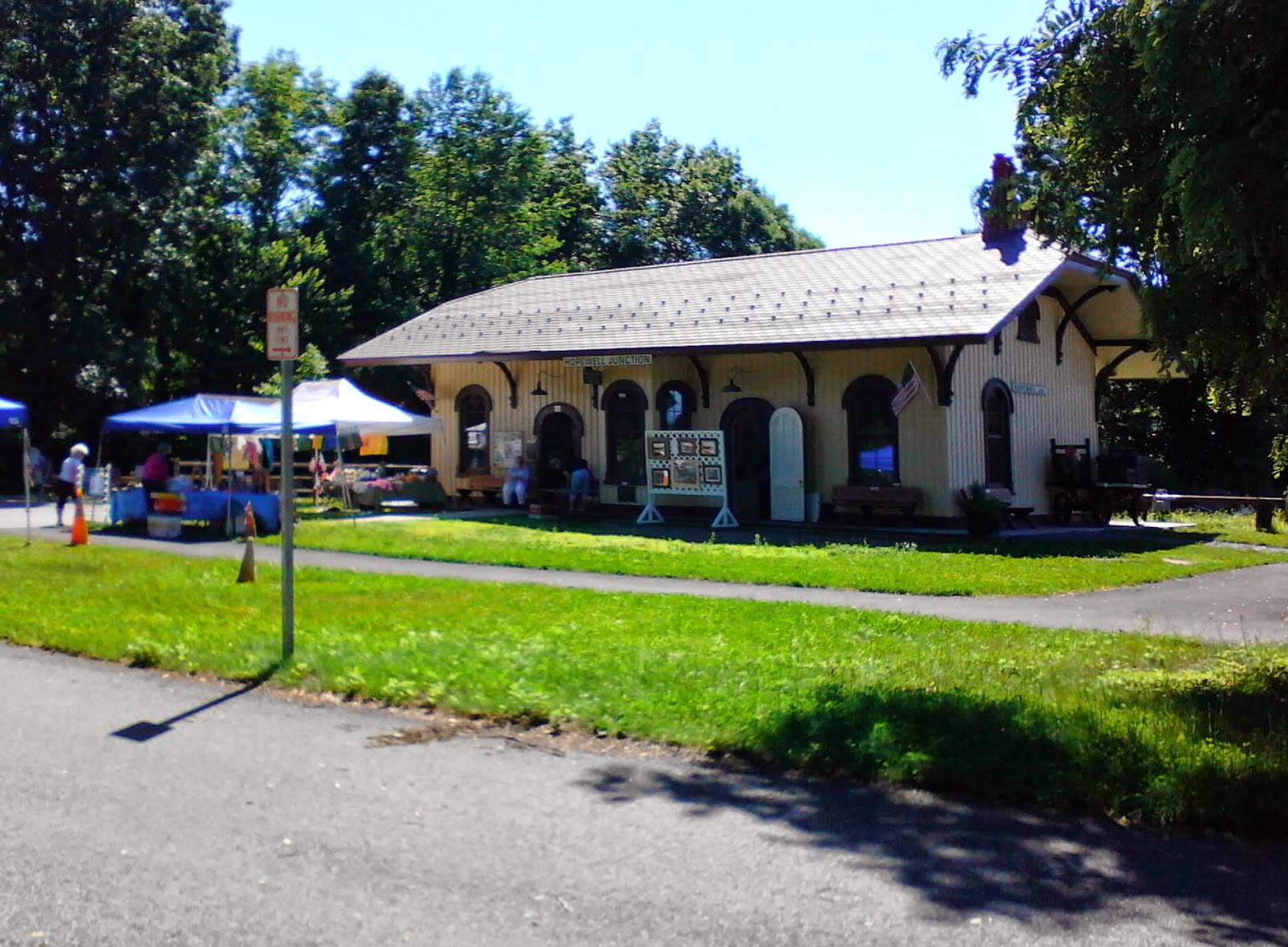 Duchess County Rail Trail
The rail trail itself is super easy - flat and well paved. It seemed to be enjoyed by lots of folks. Hikers, roller bladers, bikers (both old and young) all were out on such a lovely day but it never felt too crowded as the trail is quite wide (it appeared to have been a double-track railroad line the whole way). 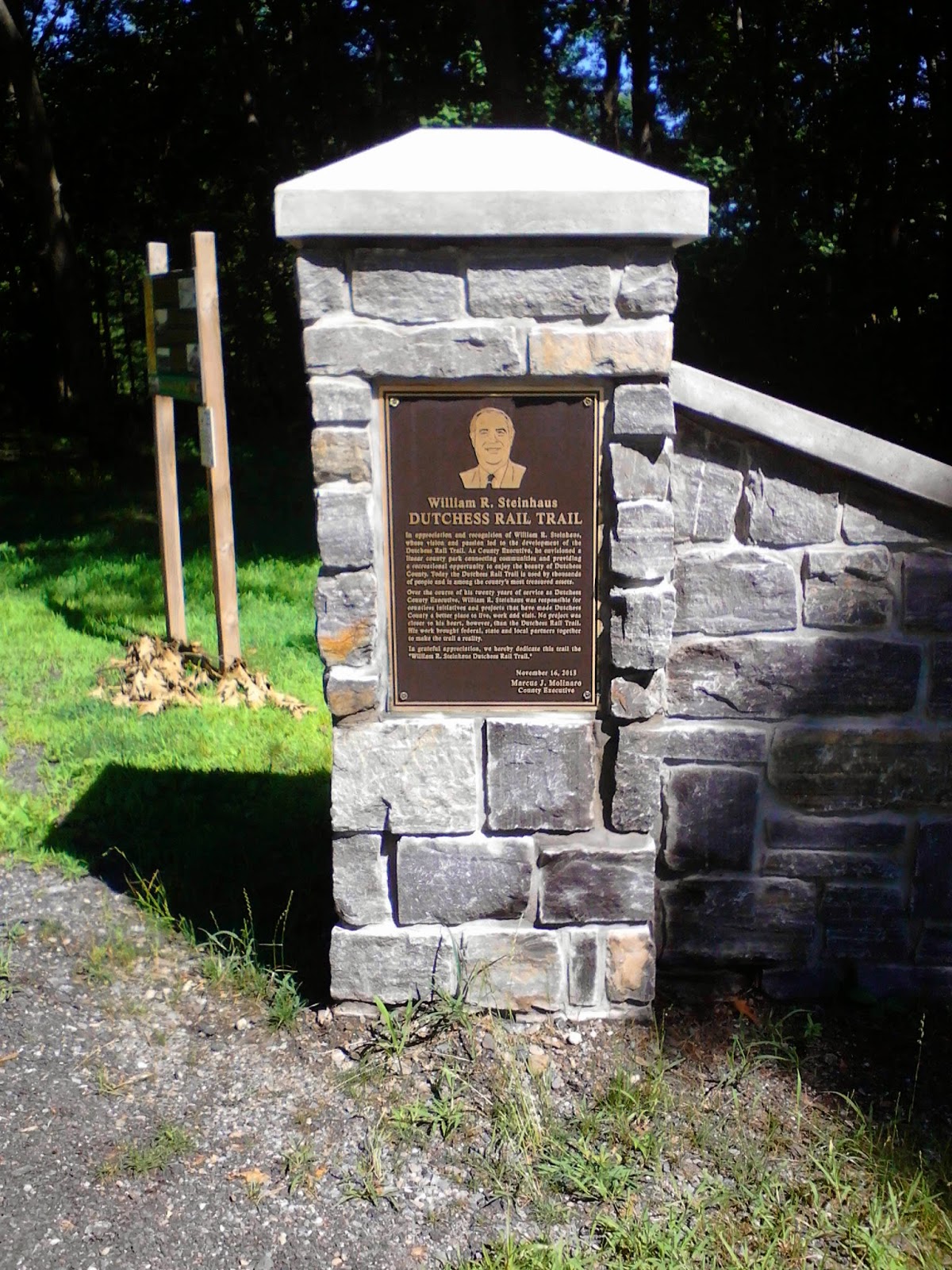 There is ample signage along the route, explaining the history and nature of the surroundings. I didn’t stop to read many as I was interested in not interrupting my riding flow but if you hike it, you will definitely return home an expert about the area! :-) 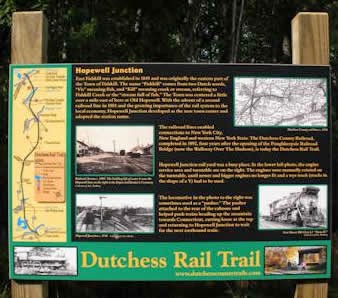 About halfway to the bridge, the trail becomes a very tall embankment that goes on for miles through a  forested area. This must have cost a fortune to build and is a testament to how important this line was. This was the first railroad to ever cross the Hudson and was a major shipping route delivering coal from Pennsylvania and goods from out west destined to the manufacturing states of New England.

I took a nice shot of the ROW as I got nearer to the bridge. 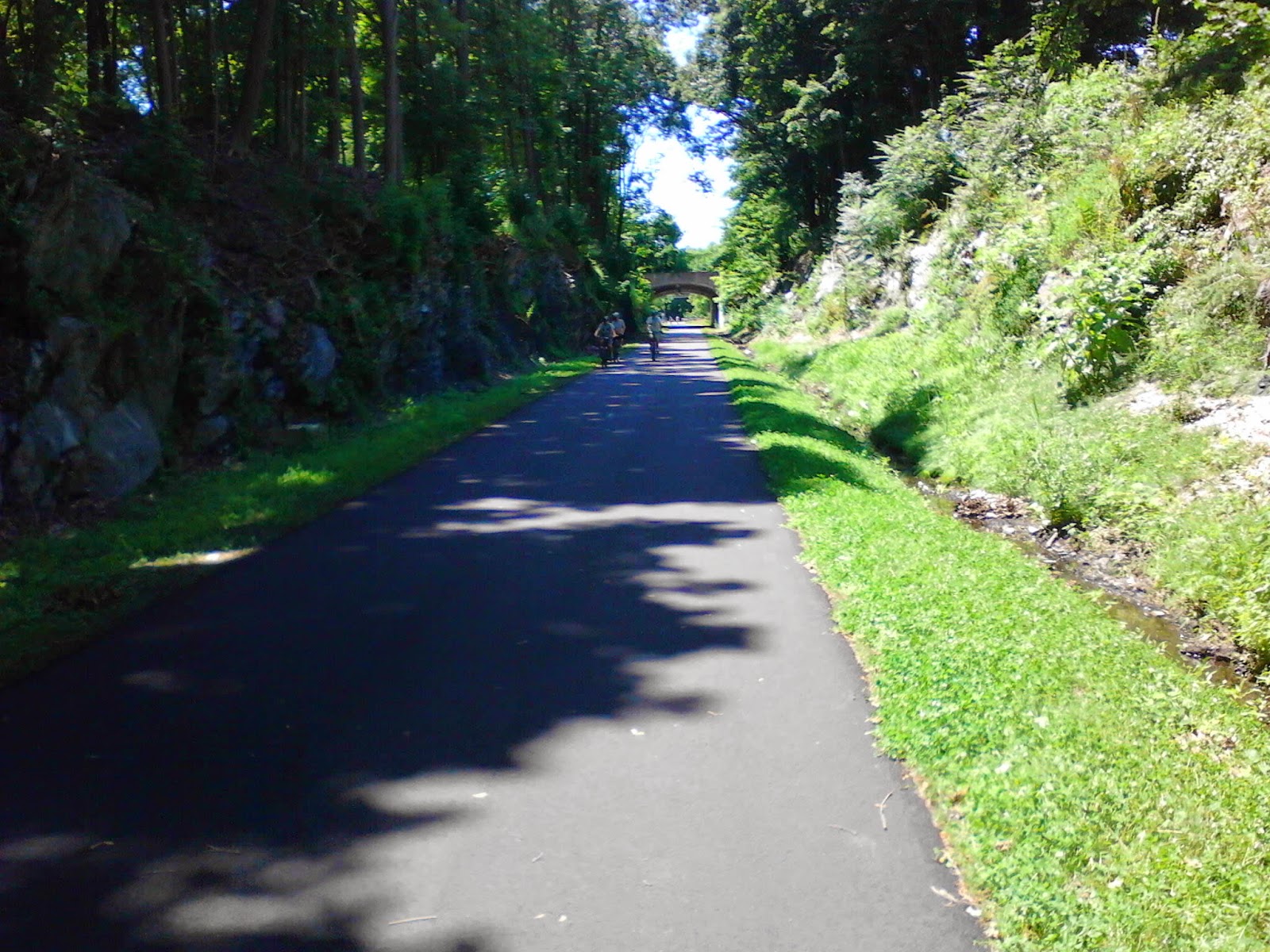 Walkway Over the Hudson

Once on the bridge, it got really crowded. This is a very popular destination and I am sure the great weather on a 3-day weekend brought the crowds out.

It is a spectacular view from 130 feet above the river. A myriad of informative signage mounted along the side fencing did a marvelous job explaining the history and construction of the bridge. 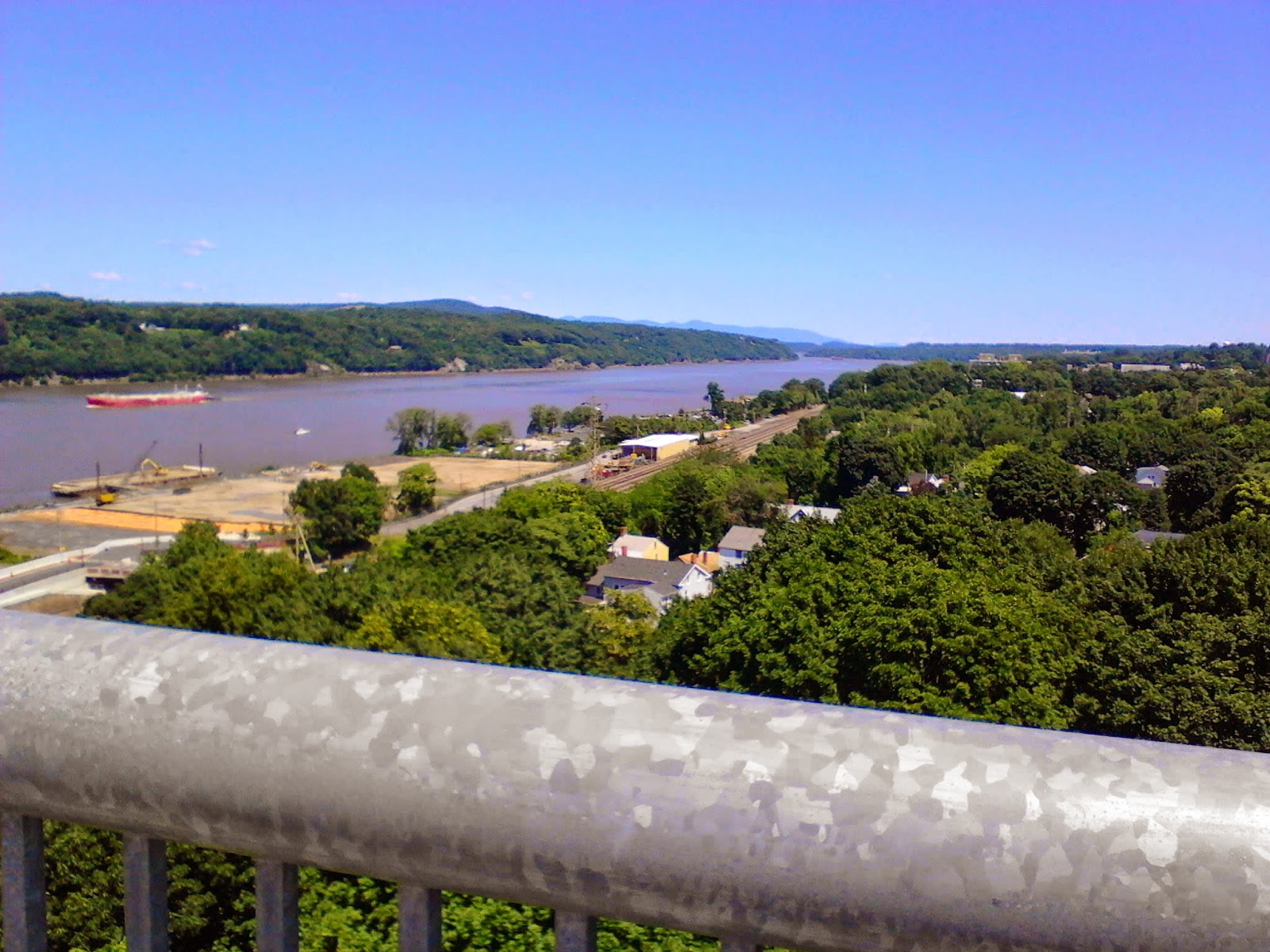 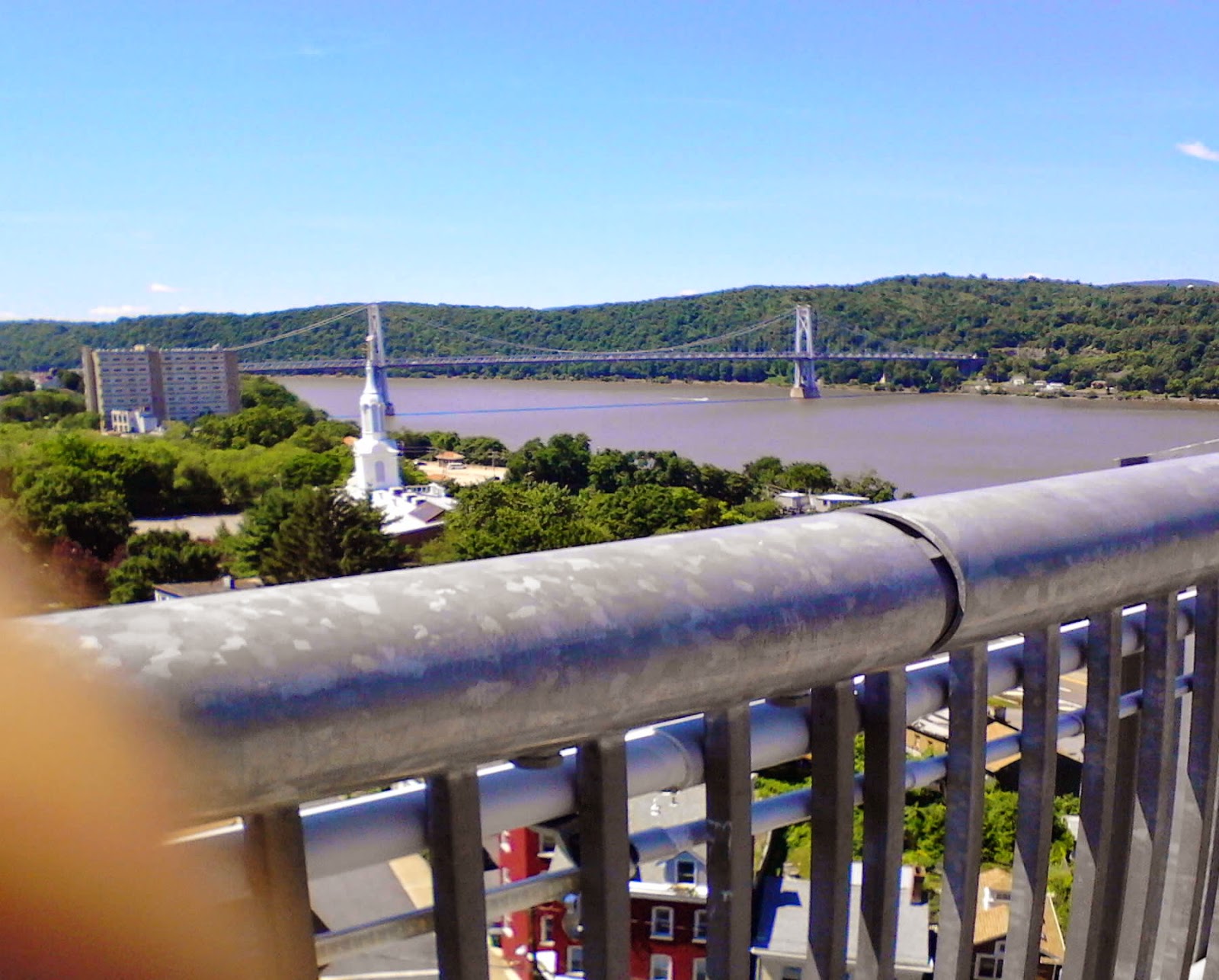 Yep - that's my finger it the photo.
My iPhone was stolen a few weeks back, so on this trip I used a small Verizon tablet.
It was too big to take my usual one-handed video while riding
and certainly not as easy to snap a decent photo :-(

After weaving my way through the crowd, I continued westward to the Hudson Valley Rail Trail heading towards the Tony Williams Park in Lloyds, my final destination.
Even though this trail is uphill the whole way, it is such an mild grade it was super easy. The truth be told… this is the most picturesque section of my ride as the trail spiraled slowly upward through rock cuts under a heavily-shaded dense forest canopy. There are even a couple of old railroad signals in place along side the trail, reminding you of the ROWs origins. 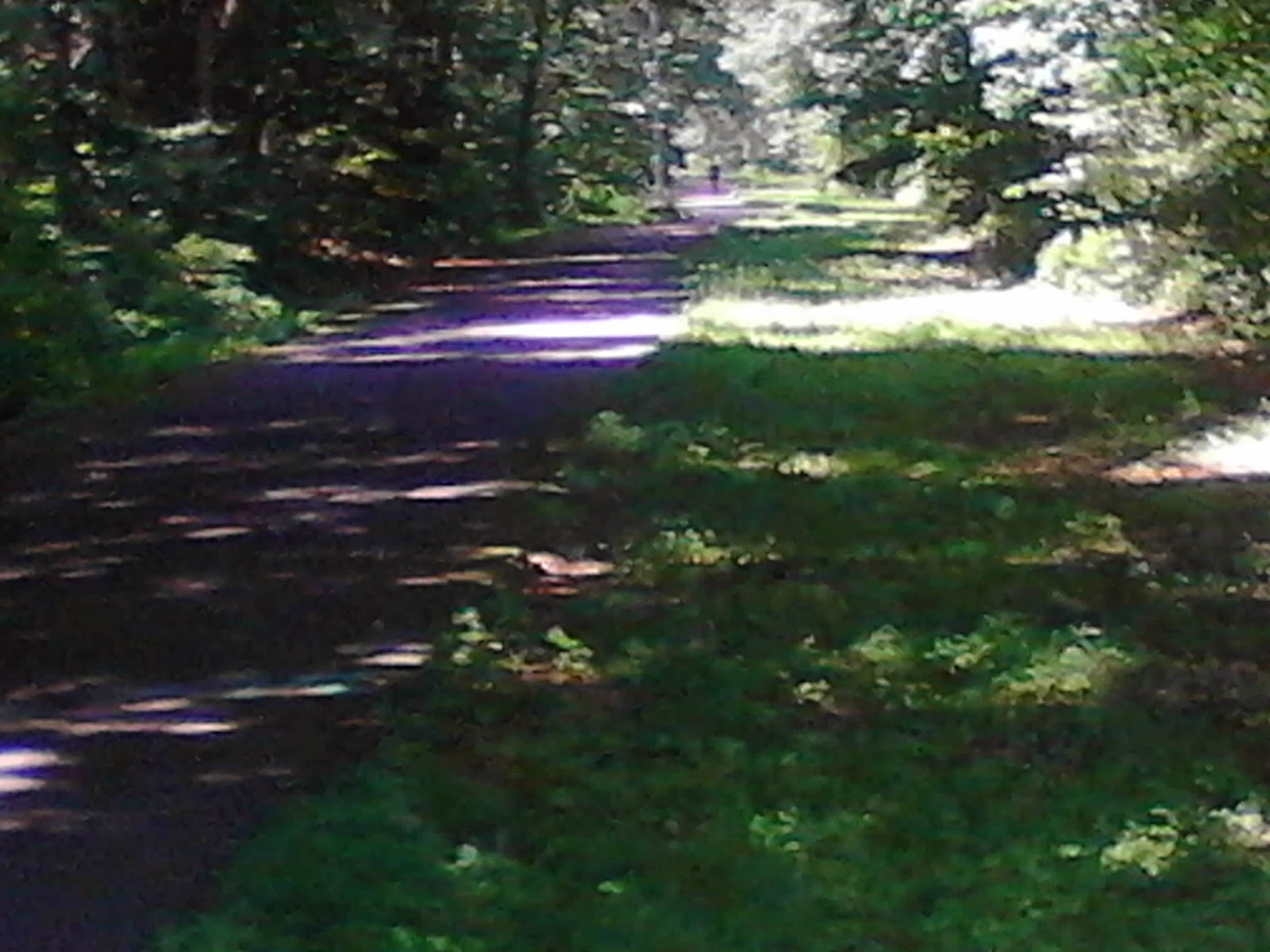 Once at the park I snapped a quick vid and headed back down, hungry at this point and eager to chow down at the first opportunity.  I veered off the trail and rode into Highland and found a pizzeria. The Sicilian was delicious :-) See street view of downtown Highland. 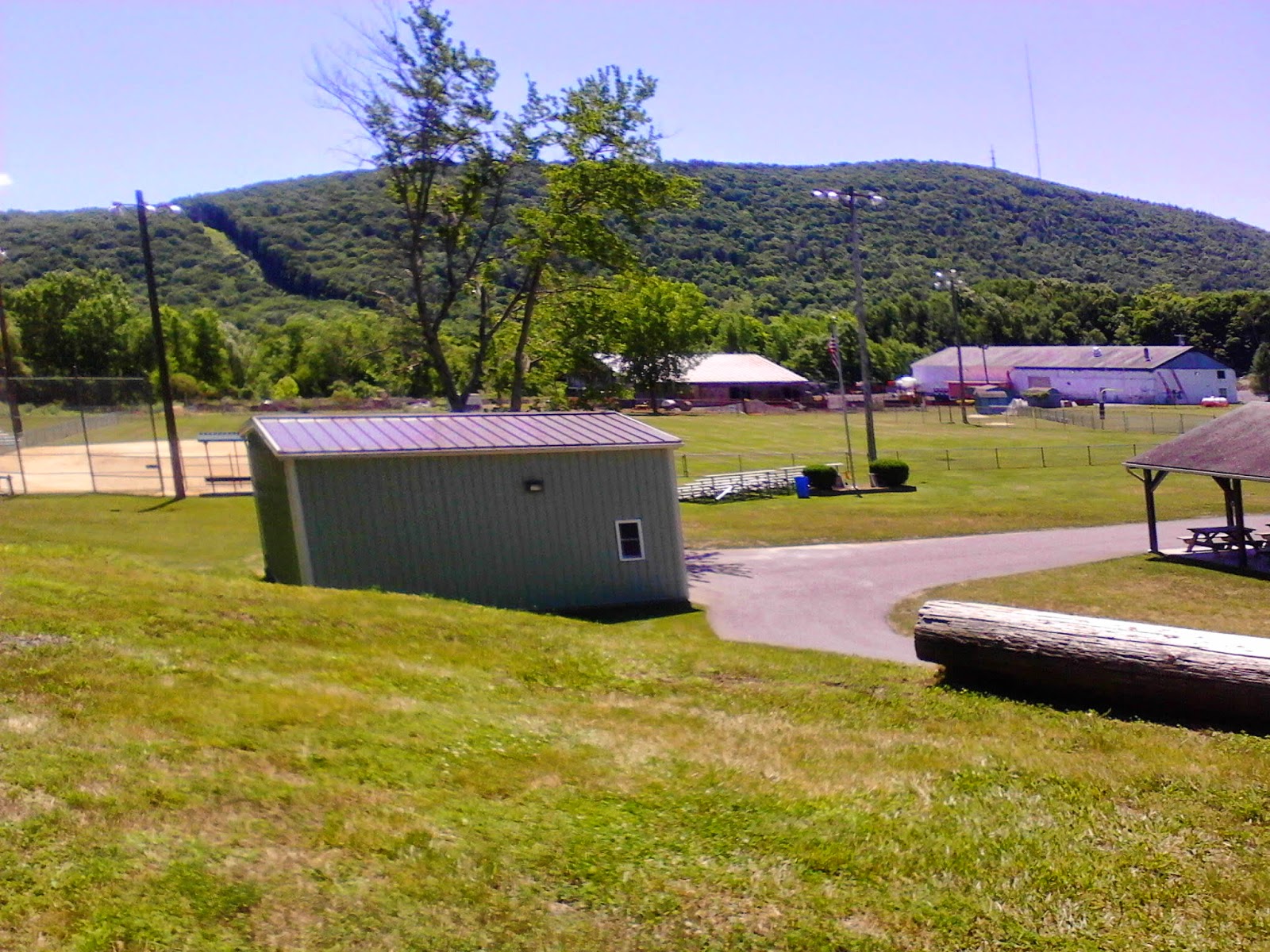 The ride back to the car at Hopewell Junction was uneventful yet pleasant and at the end of the day, my bike odometer showed almost 40 miles of riding. Not bad for a beautiful day of exploring.

Walkway Over The Hudson >
Built in 1888 to link New York and New England to the coal beds of Pennsylvania and the West, the steel-truss Poughkeepsie-Highland Railroad Bridge was the longest bridge in the world at the time stretching 6,768 feet (approximately 1.28 miles) over the Hudson River