The story of the short-lived Mohansic Branch is fascinating as the headlines above indicate...

In order to relieve the overcrowding of mental institutions in New York City, in 1909 the State Commission in Lunacy (yep that was the official name!) purchased 550 acres on Lake Mohansic with the intention of building an asylum to accommodate 2,000 (later 6,000) patients. The property was later expanded to 660 acres, with an additional 490 acres for the New York State Training School for Boys.
In 1911, a spur from the New York and Putnam Railroad was built from Yorktown Heights and across Crom Pond to the asylum site.

Progress was going smooth for a while… Construction of the hospital was underway, starting with three "cottages" which housed 165 inmates. But on July 4, 1913 19-year-old hospital attendant Charles Wiley, Jr, was murdered at one of the cottages.

Then in 1916, continued construction on the asylum became the subject of heated debate as concerns mounted regarding pollution to the New Croton Reservoir and the New York City water supply from sewage the asylum would produce. Eventually the the New York State Governor ordered construction stopped to protect the watershed, and in 1918 he signed a bill which abandoned the hospital project.

The railroad line was abandoned in 1917 and the property was converted to a state park in 1918. The land is now the FDR State Park.

I hope to get up there soon to sniff around the backwoods and take photos... Bing Bird's Eye Views uncover some of the old roadbed. https://binged.it/2i38Oqa 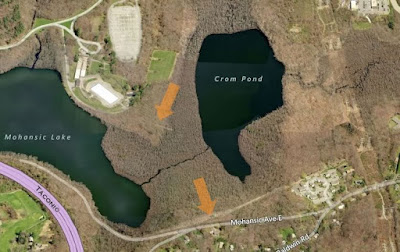 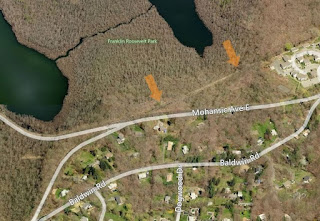 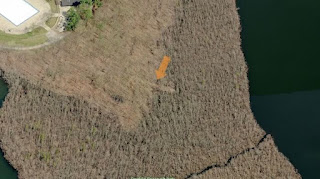 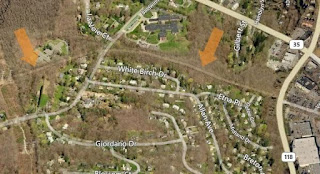 Good News! It looks look the old rail bed will soon be reclaimed as a trail way. The Proposed Mohansic Trailway route follows the town-owned abandoned railroad spur from Route 118 opposite Downing Drive to Baldwin Road it all eventually connect to trails in FDR State Park. Grant money has been allocated.