“A lunch hour excursion took us back to the past…”

Newport currently is a white-collar corporate enclave of high rises, chain stores and franchise restaurants. Sleek and sterile, it is — for better or worse — the modern economic answer to the industrial decline found across much of our nation.

Back in the glory days of railroading it was an entirely different place. Brimming with a blue-collar workforce, it was bustling with trains, grimy warehouses and active piers.

As you walk along the water’s edge, you can get an inkling of those bygone days seeing remnants of pier pilings and a set of gracefully done signs detailing the area’s transformation.

It was delightful to witness how nicely kept up the Hoboken Terminal was. You could feel the grandeur of yesteryear still emanating from the fine detail of mahogany and the ornately-decorated ceiling.

New Jersey is a dense and crowded state. At least in the shadow of New York City, it is admirable the myriad of transpiration choices available. The Hoboken Terminal serves not only the trains of the NJ transit but also the PATH and the Hudson-Bergen Light RaIl as well as a hub for Bus and Ferry connections.

Along the Water's Edge 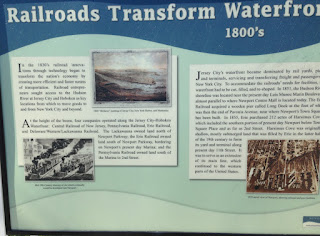 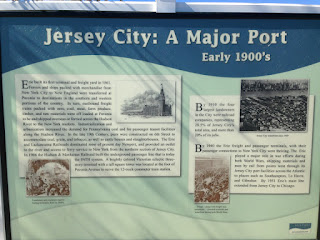 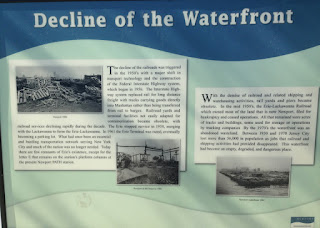 Can you imagine the bustle on this pier? 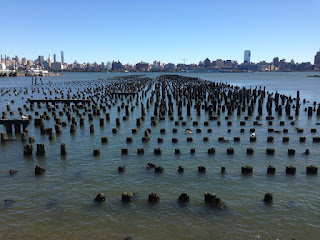 Beyond the pilings is southern Manhattan and the Freedom Tower... 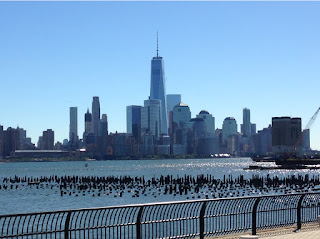 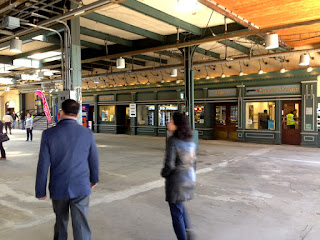 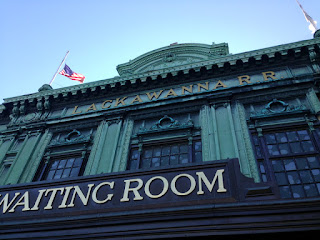 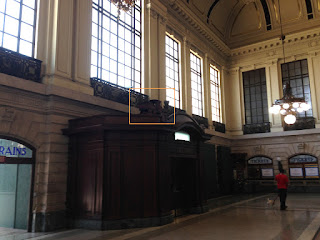 Easy-to-read maps are found on the signs as you enter the terminal area. 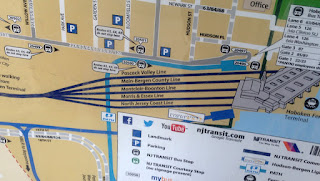 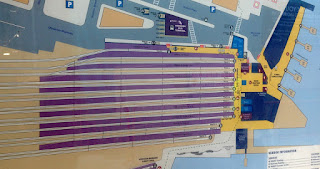 Of the five passenger terminals operated by competing railroad companies that once lined the Hudson Waterfront; Hoboken is the only one in active use. Those at Weehawken (NYC), Pavonia (Erie), Exchange Place (PRR) were demolished in the 1960s.

The facility was built and operated by the Delaware, Lackawanna & Western (DL&W). After the original structure was destroyed in 1905 when a ferry caught fire while docked, the Terminal was rebuilt and opened on February 25, 1907.