A friend of a friend, Michael Adams, knowing my keen interest in railroad history, invited me to visit the Ravena-Coeymans area and show me the sights. He kindly set aside a few hours of his time on Sunday and gave me a fact-filled tour! It’s a charming community and an interesting study in economic growth, decay and rebirth.

Once a railroad junction and major industrial hub of brick making, it is now undergoing transformation into a thriving port and is making a concerted effort to revive much of its historical charm and unique historical landmarks. 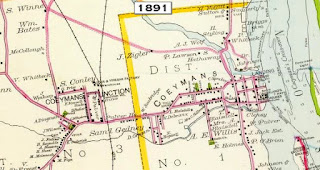 Coeymans (pronounced "quee-mans") was named after Barent Pieteres Koijemans, a Dutchman who purchased land from the local Indians in 1672. The area became known as the Coeymans Patent. Shipbuilding, the harvesting of ice and brick making were the major industries.

Interestingly—as my tour guide informed me—there was a gate between Coeymans Junction (later to be renamed Ravena)—where the "richer lived" and Coeymans—where the poorer workers lived (down by the river in close proximity to the factories).

Our first stop was the elegant Civill Building, near where the gate was. [We were on the "elite" side of the gate :-) ] It was made from local bricks of course. 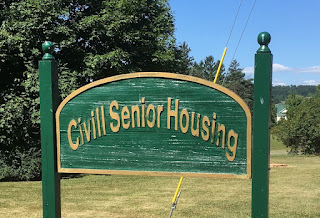 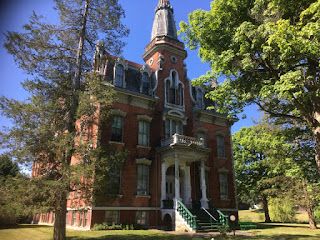 We next descended to the riverside to check out the Marina...
Unbeknownst to an uninformed passerby, there is a beautiful waterfall underneath the bridge that leads to the port... 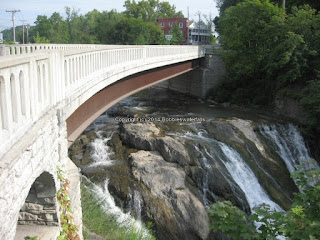 A bit north of the marina is the port area. This is where the former brickyards were. We we're lucky to see a large cargo ship pass by at the time.
This area was formerly a brick factory.

"At the beginning of the twentieth century, brick manufacturing was the dominant industry on the Hudson River. One hundred thirty manufacturers employed seven to eight thousand workers. It was the largest brickmaking region in the world, supplying vast amounts of this most essential building material to the fastest-growing city in the world. Spanning three and a half centuries, this industry ceased to exist in the year 2002."
Source: http://brickcollecting.com/hudson.htm

In 1866, the Saratoga and Hudson River Railroad was built, connecting Athens NY with Schenectady. Athens had a ferry that connected to Hudson NY.  Hudson at the time was bustling with economic activity and the fourth-largest city in New York State! Be sure to click to enlarge the maps... 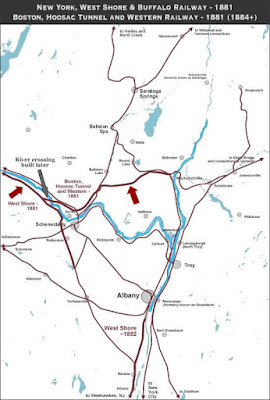 Source: The Growth of Railroads in the Capital District

By the 1890s, Ravena had a small railroad yard and even a roundhouse!
The train station is now the Department of Public Works. 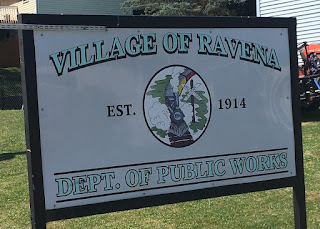 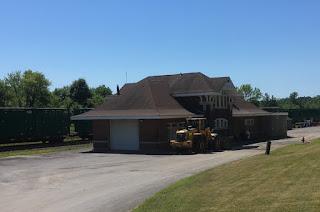 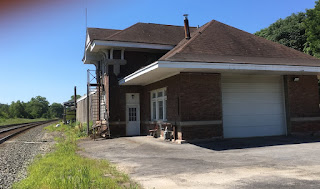 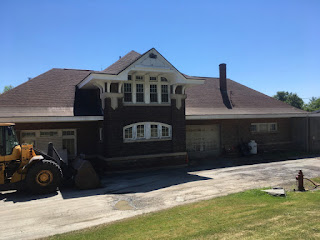 Postcard of the Station 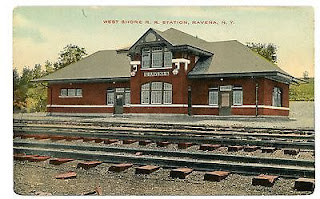 Today there are very little traces left of the former railroad junction. When the Selkirk Yards were built a few miles north in 1924,  the Ravena railroad facilities were removed and—over time—the connecting lines were abandoned. 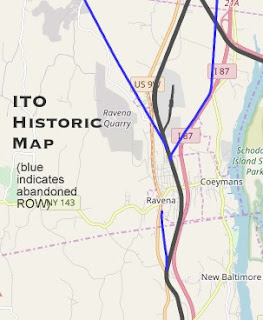 The original route between Feura Bush and Ravena through South Bethlehem was abandoned in sections over the years after the Selkirk Yard was first built (1924) and when it was rebuilt (1967).

Passenger service on the line to Albany ended in 1958 and to Haverstraw in 1959, ending direct train service on the west side of the Hudson River. The railroad line now serves as CSX Transportation's principal freight route from western points to New Jersey, via the former NYC Selkirk Yard.

Coal Trains - For quite sometime CSX delivered coal to Ravena, NY. The Lafarge North America plant on Route 9W (see below), required a lot of coal in its former kilns. In 2015, due to environmental concerns, the plant converted its kilns to a cleaner process which involved much less coal. The coal house down near the former train station subsequently was abandoned and later converted into a motorcycle shop.

But careful sleuthing online of aerial and topo maps reveal vestiges. Sadly, much "in-the-field photographic documentation" would involve extensive traipsing through the woods on private and industrial property. Fortunately in South Bethlehem, I was able to find an impressive remnant (see below).

How many folks have ridden the New York State Thruway and wondered what the heck this strange thing is?

This is a covered conveyor belt that connects the Hudson River to a huge cement plant more than a mile away. The operation is owned by Lafarge, often cited as the largest construction materials company in the world. The quarry site for the cement plant—a bit further inland—is connected with an additional conveyor belt which goes through the hillside. 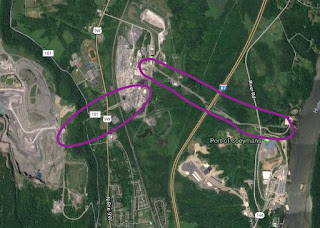 Here's view of the second conveyor which we passed under heading north. 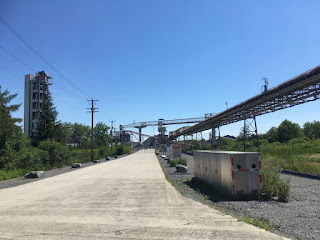 Well no railroad-oriented tour of the Ravena area is complete without a visit to the Selkirk Yards! My tour guide Michael was eager to show me the yards and luckily the gates were open on Sunday for a quick drive through. Stretching from Beckers Corners to Feura Bush it was built by the New York Central Railroad and opened in 1924. Now it is part of CSX Transportation and is its major classification yard for the northeast. The yard can process over 3,200 cars per day! 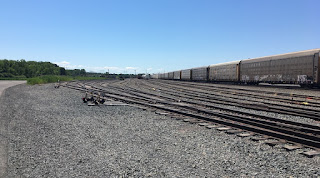 Finally after parting company with Michael, I drove up to South Bethlehem, determined to find the former West Shore RR abutment I saw on Google Street View. 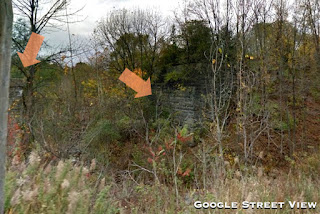 Sure enough there it was! It is probably much easier to discern in the winter months...

Just south of the former river crossing, an abandoned set of buildings gives no hint to the extensive quarrying behind them...
Apparently there was a spur here at one time... 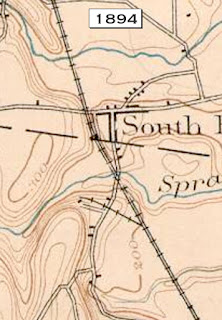 By the cemetery on Bridge Street is where the ROW emerged... 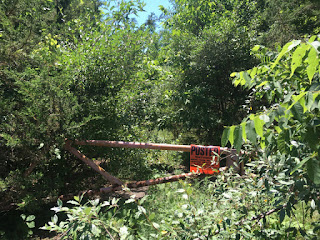 Before returning to Connecticut I drove up to North Bethlehem to check out the mountain biking park.