Retracing the Kaydeross Railroad (Part One)

On December 26th, Gino and I set out to retrace the Kaydeross Railroad from Ballston Spa to Middlegrove. His wonderful site - The Ballston Terminal Railroad - intrigued me and I thought it would be an interesting adventure to locate the old ROW and mill locations whenever possible and find out how much, if any, is still there. It was an amazing and productive full-day adventure---we were overwhelmed with vast amount of mill ruins we found close to Ballston Spa! We gathered so much info and photos “in the field” that I decided to post the trek as a series.


A bit of background on the town and creek...


Growing up in Charlton NY, Ballston Spa was always a bit of an enigma to me. On the one hand, on our frequent family trips up to Saratoga’s Geyser Park, the Iron Spring tunnel and the looming presence of the Chocolate Factory—Link > —gave me a sense of the town's early grandeur but back then—on our drive throughs—it was more like a gray, decrepit, sad and forlorn place to get through quickly.

Fortunately times have changed for the better and Ballston Spa has made a dramatic comeback. Although the tunnel is now blocked, the former Chocolate Factory has been refurbished and main street is filled with vibrant and colorful shops and restaurants.


The Mohawk Native American tribe is attributed for naming the creek Kayaderosseras (which translates into "Valley of the Crooked Stream") due to its tortuous course and dramatic drop in elevation. Between Middlegrove and Ballston Spa it drops over 340 ft and by the mid 1800s, over 8 dams were built to provide water power to a host of paper mills. Of the dozen paper mills situated along the creek in the late 19th century, only the Rock City Falls Cottrell Paper Company continues today.

The Kaydeross Railroad (formerly the Eastern New York Railroad and Ballston Terminal Railroad) was a trolley line that served industries along the Kayaderosseras Creek between Ballston Spa and Middlegrove, NY.

The railroad primarily served the many water-powered paper mills and large tool factory that were located along the creek. The trolley line was unique for being one of the few electric-powered railroads in the country to function mainly hauling freight cars.

Construction for the line started in 1896 and it operated from 1898 until 1929. Never being that lucrative, the line changed ownership three times. By 1920, most of the paper mills upstream from Ballston Spa had shut down. Although other types of industry moved in and provided new jobs (such as Bischoff’s Chocolates and the textile mills), these industries were all located inside of Ballston Spa and did not require the electric railroad’s services. However, the few mills that remained in operation upstream banded together to purchase the railroad and operated it under the name Kaydeross Railroad Corporation for its final ten years. The trek took the full day and we didn't even have time to get out of the car and explore the Rock City Falls and Middlegrove mills - it was turning dark at that point. Nevertheless, it was a great "journey of discovery". Due to the large amount of photos and info collected, the journey is posted as a three part series. A separate posting (not included in this series) will be posted at a later date detailing the tour Gino gave of the Ballston Spa midtown island/pond and the street car era.

The Downtown Mills and Our Initial Trek Upstream on the ROW

The first leg of our trek was exploring the north and south shores of the creek right near the Rt 50 bridge. It is hard to imagine but even that area has changed significantly over the years.  The large dam and two railroad bridges are no longer there and the bank on the north side of the creek has been built up and heightened considerably.

This 1866 Beers map shows the original dam and mills prior to the electric railroad. 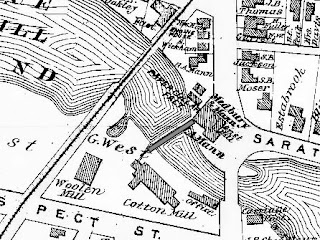 The map below indicates where the electric railroad crossed the creek. 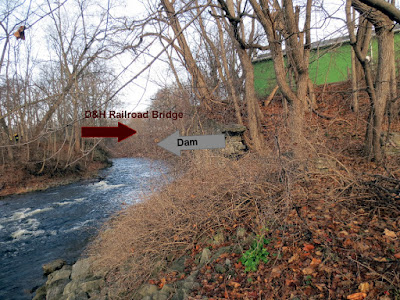 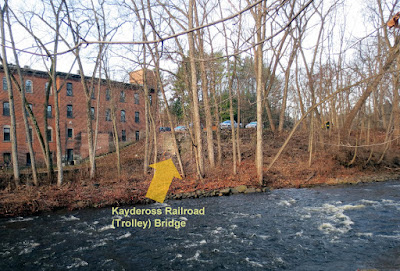 How it was... The dam,  the trolley bridge, the railroad bridge and a factory connecting walkway all crossed the creek here... 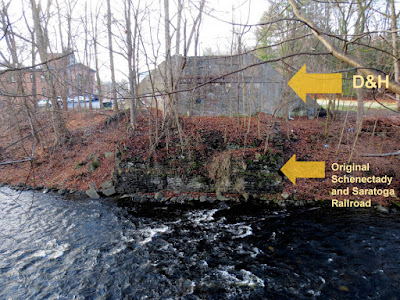 The trolley (electric rr) ran along side the white building and continued on the path of what is now Bath Street. Across the creek, a spur climbed the hill and ended.


Going Upstream Along the Creek

Retracing the ROW - Gino and I first descended a muddy hill to get to where the old ROW was. I got a large thorn in my thumb (OMG - blood!) and Gino was splattered in mud but we immediately saw the ROW and kept on our merry way... "Go west..." was our mantra. A few railroad ties were scattered along the way. 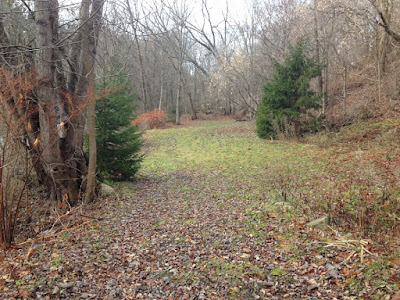 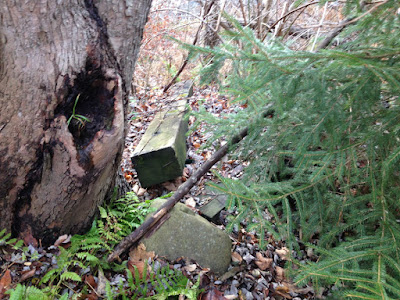 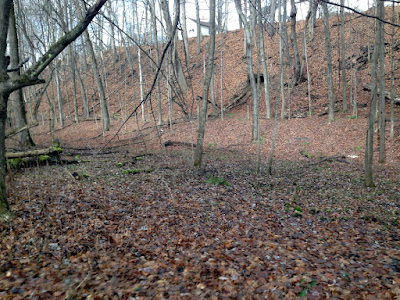 Shortly north of where this photo was taken, the ROW disappeared. BUMMER! To our left was the raging creek and to our right was an 80 ft muddy steep incline. We thought it would be easier and quicker to scale the incline... WRONG!! Slipping and sliding, we struggled up the ascent -- ropes and mountaineering equipment would have helped for sure as it was pretty dicey but eventually we made it to the top and walked back to the car.

Next? Find the mill ruins!