The morning was cloudy and crappy but by early afternoon it got better. I headed down to Schenectady to do a section of the Mohawk Hudson Rail Trail (see below) that I hadn't done yet: eastward from Schenectady to Niskayuna. 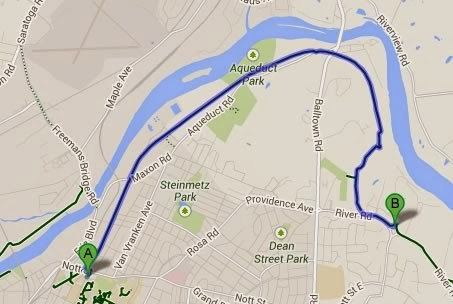 I was planning on starting my trek from Schenectady Community College and ride thru the Stockade area and the industrial ruins of the former Alco factory spread but it was sprinkling so I decided instead to drive thru the Stockade area and start further east. I ended up parking right off Nott Street near Union College and started from there. Thankfully the weather had cleared. 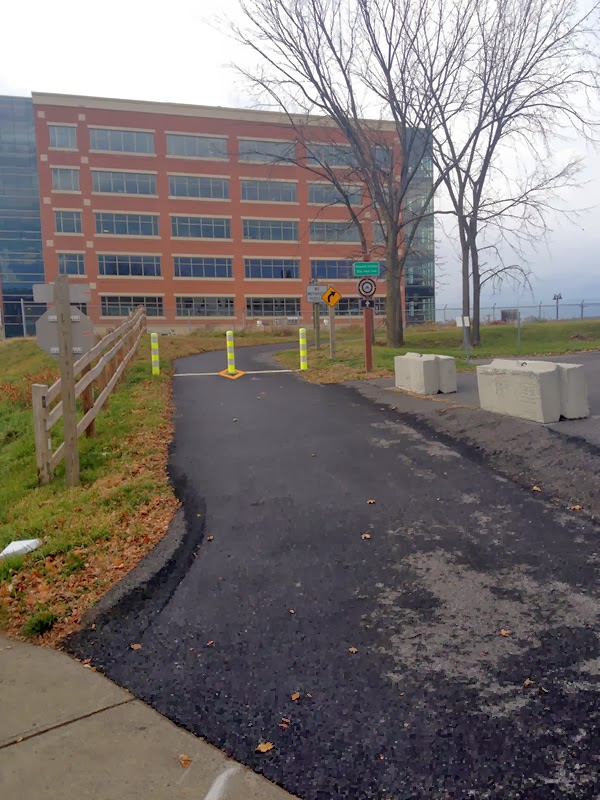 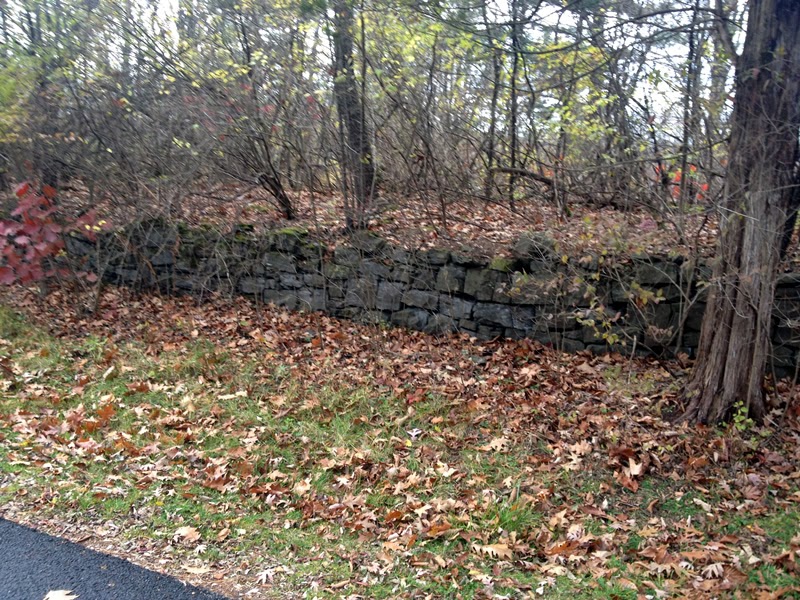 Easy and flat, the paved trail goes by a couple of industrial spots and then it gets woodsy. Turns out you are riding in the old Erie Canal and you can see remnants of the tow paths on occasion on either side of the trail way. <Wrong! I checked the historical map and the canal is much closer to the river. Review the Historical Map >

Railroad Ruins
Being a railroad history buff, when I saw a old railroad bridge abutment looming off to the side, I parked the bike and explored it. 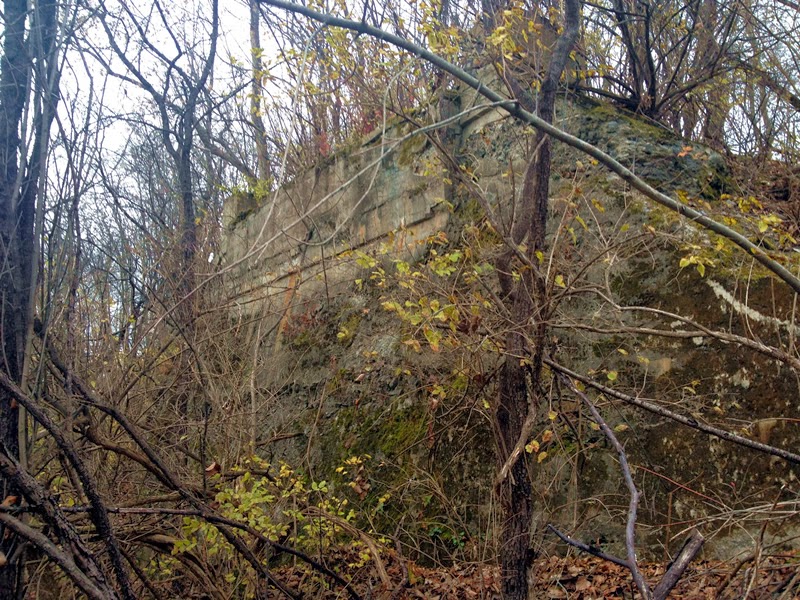 A rotting railroad tie at the top of the embankment confirmed it was railroad related and not canal related. It must have been the start of where a trestle began. Perhaps it was super marshy here and a trestle was needed to maintain downhill drainage. (?) 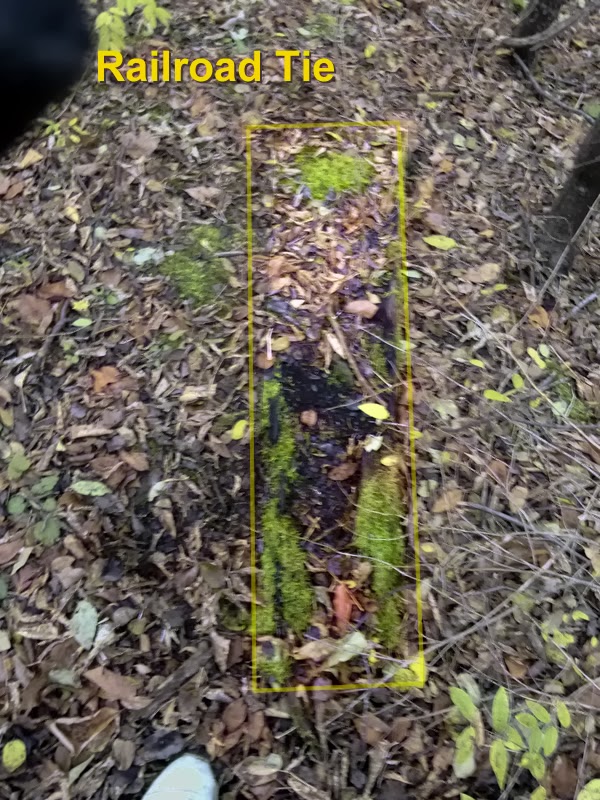 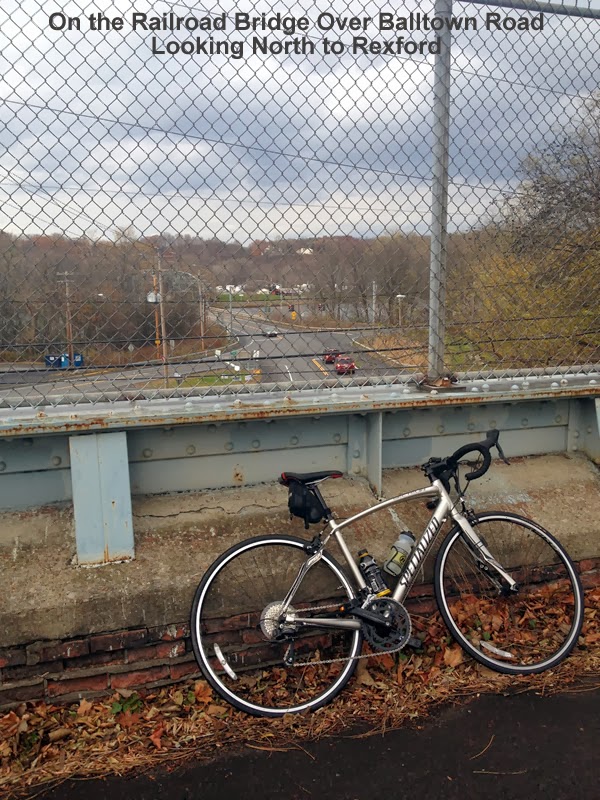 Compare to the historical view >
(Amazing!)

On to the Research Lab...
Soon signs appeared off to the left, warning of dangerous cliffs / no trespassing / etc. which, ironically tempted me to dismount and go exploring :-)  but I trekked on. After a few more minutes of riding, a fence and sign blocked where the railroad bed continued and the trail veered to the right up a large hill. 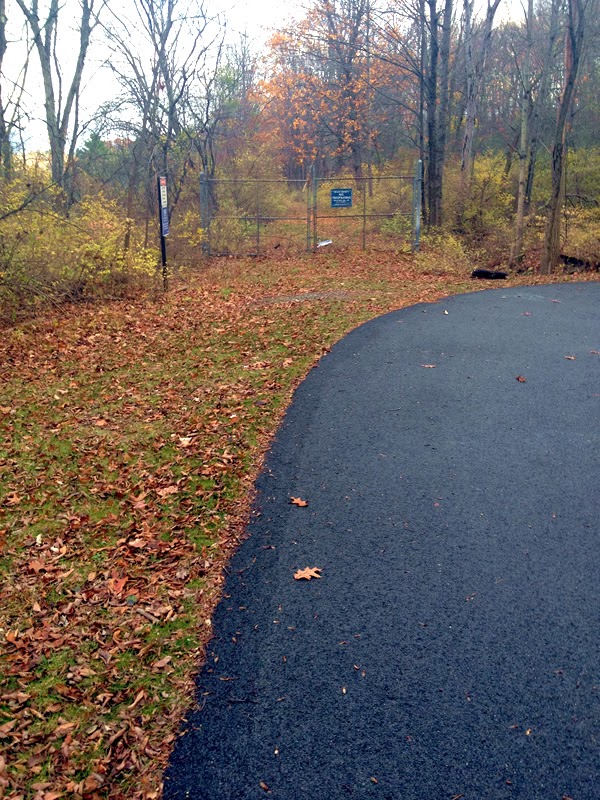 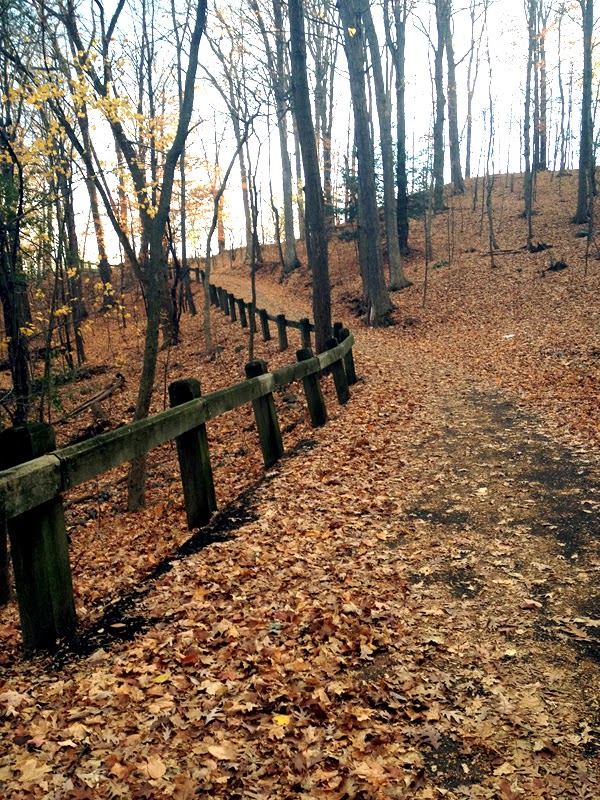 I managed to ride up the steep hill without a problem.  At the top, a small shed with benches and a picnic area were thoughtfully provided. 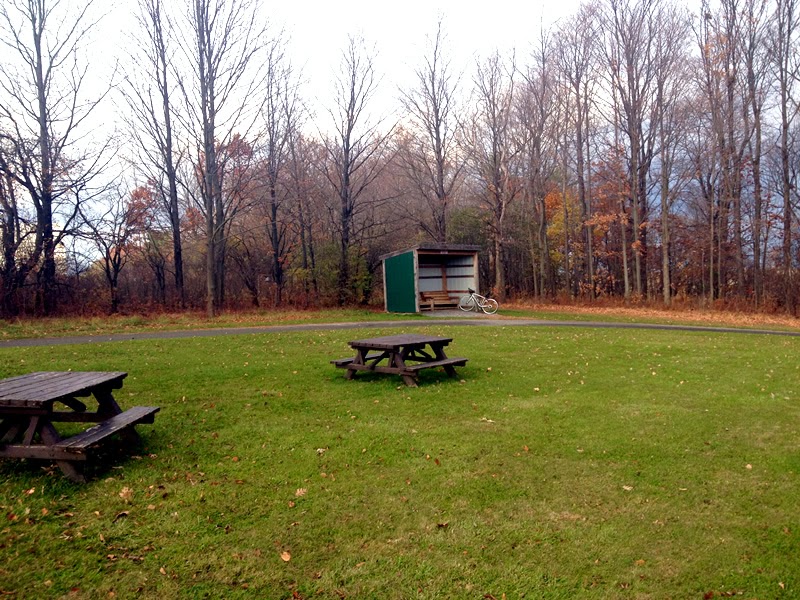 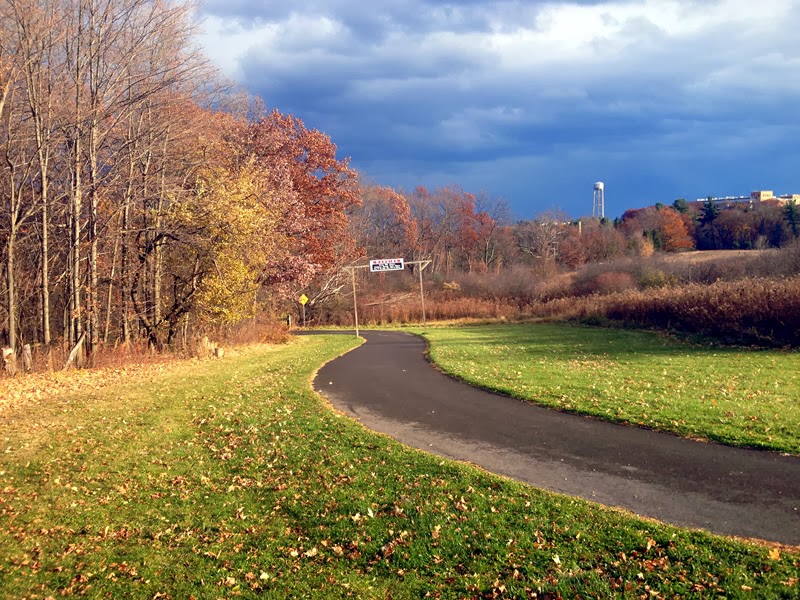 The woods turned to scrub meadows and the sunshine had returned. I encountered a few walkers and dog walkers along the stretch and stopped to take a few photos for my now retired Dad. He worked at the GE Research Lab and I figured he would enjoy seeing his work place from a few new viewpoints. It can be seen glistening in the sunlight at the top of the hill. :-) 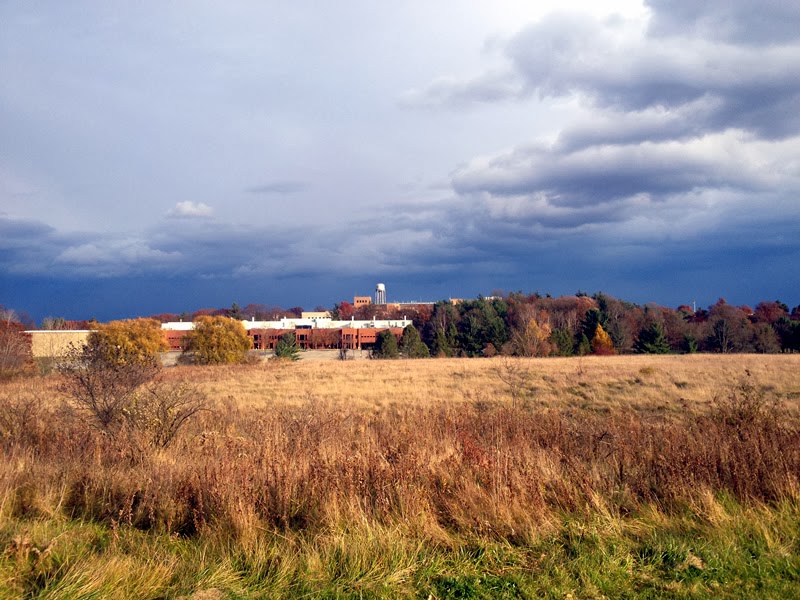 The trail merges along the road and at the top of the hill I took a photo of the main entrance into the Research Lab. 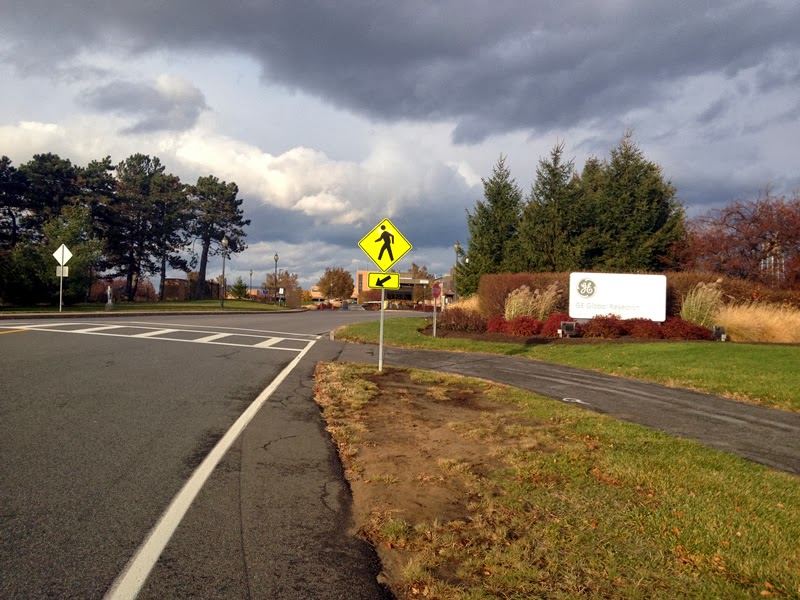 The wind was ferocious so I opted to head back from this point. I bombed down the short hill but only reached 20 mph due to a wicked headwind.

On the way back thru the meadow area, I shot a handheld (one hand on the handlebar) video...
The video below shows (1) the trail where I first started just east of Schenectady and (2) the second part shows a snippet of the return from the GE lab right before I headed down the big hill.

Aqueduct
Once in Aqueduct, I decided to veer down to the river and check out the old aqueduct ruins close up. 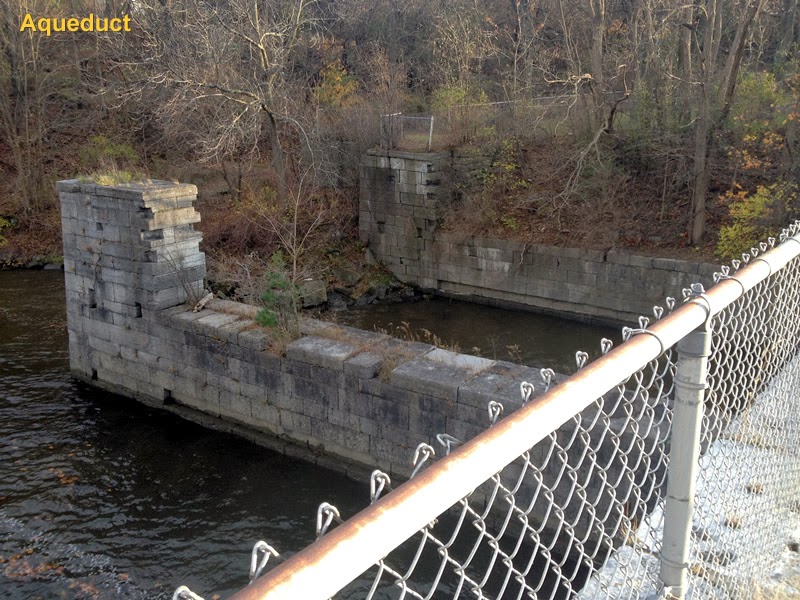 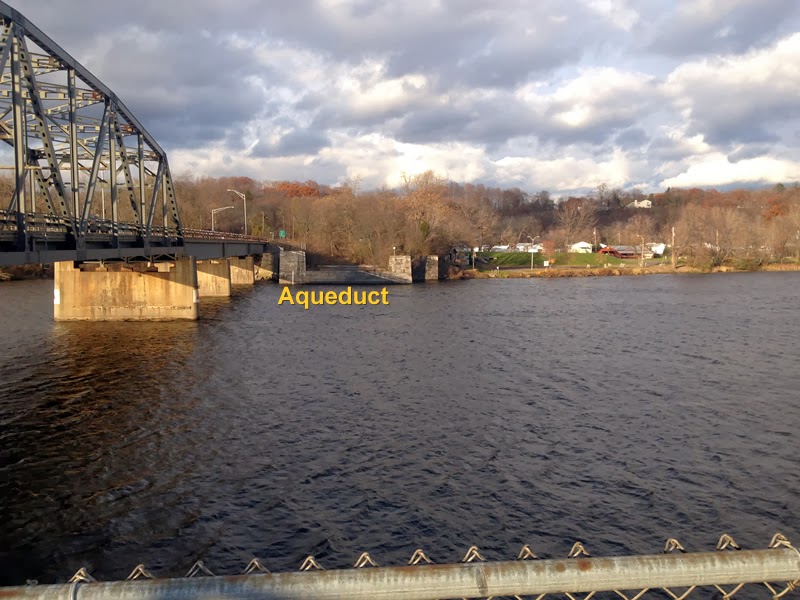 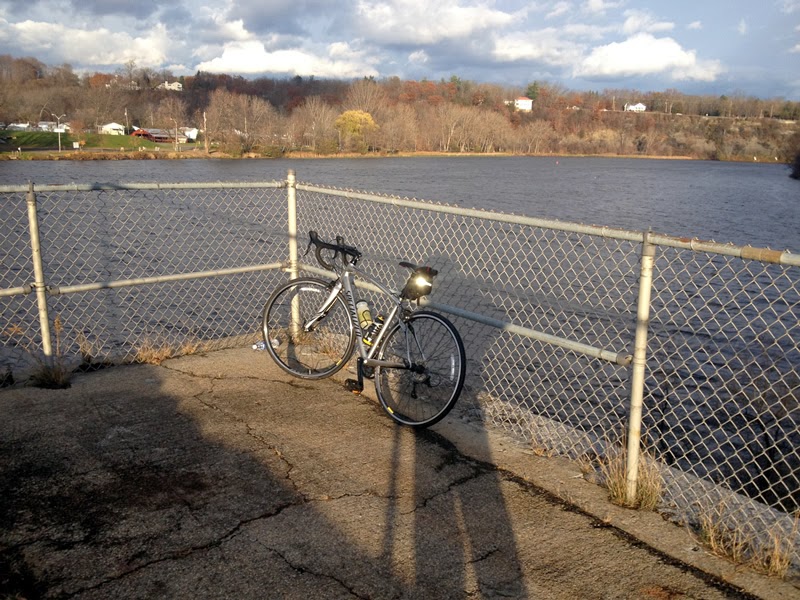 Here is the view down river  - the sun was shining but the wind was strong: 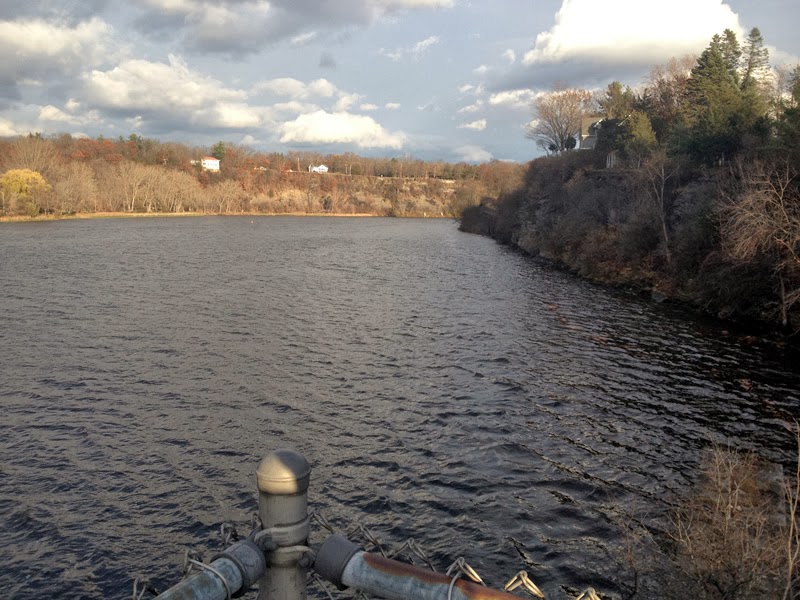 Riding back up to the rail trail via Aqueduct Road me me the opportunity to stop and take a photo of the arched bridge under the railroad. This is where the old Balltown Road went. 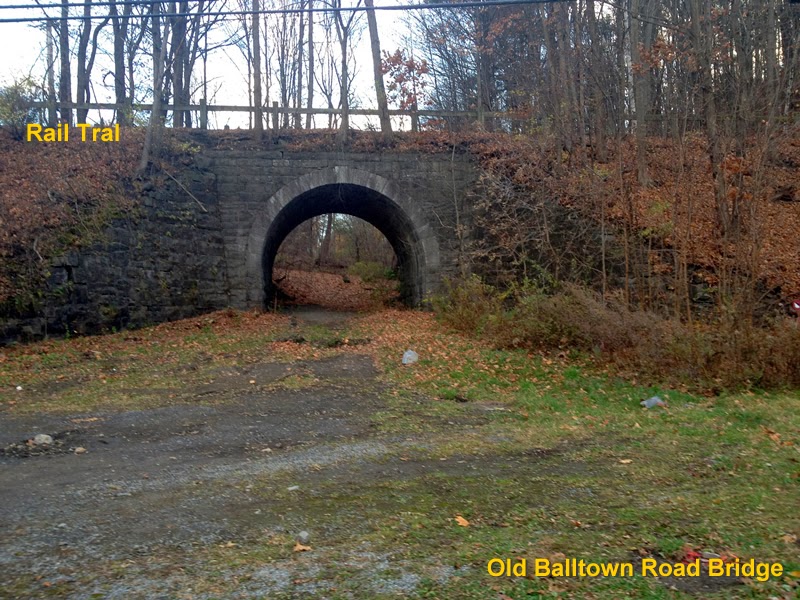 Compare to the historical view >

There was a a strong headwind the whole way back and it seemed to get dark much earlier but the rest of the trek back to the car was uneventful yet pleasant. 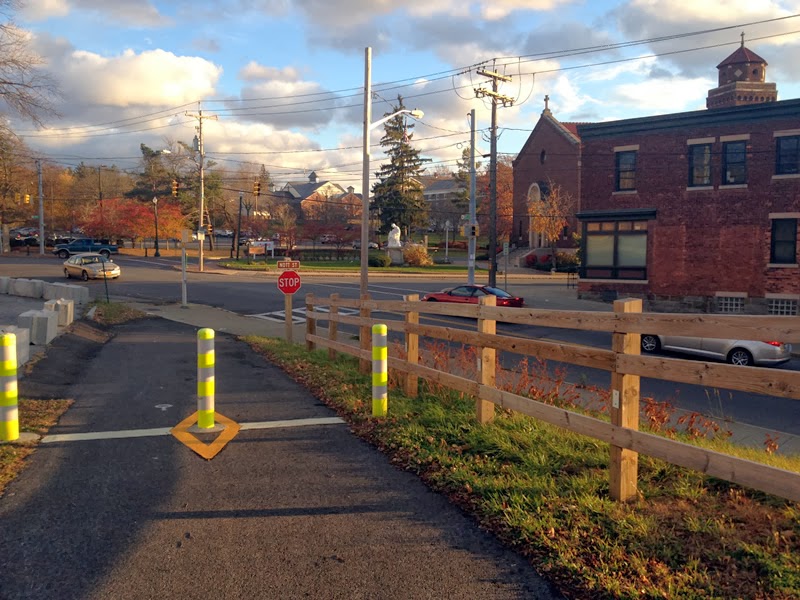 Previous Mohawk Hudson Rail Trail Rides are posted on this blog
Great Historical Site About the Railroad >
Posted by Rich Coffey at 2:16 PM