Always curious about these huge silos seen from the South Glastonbury side of the Connecticut River - I ventured down to the Rocky Hill riverside after mountain biking in Cromwell. 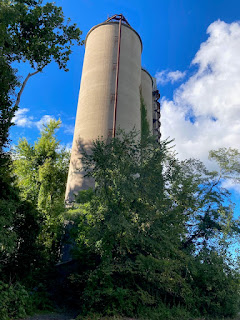 Here's the old railroad station - it looks renovated and perhaps destined for revival as a restaurant or store. 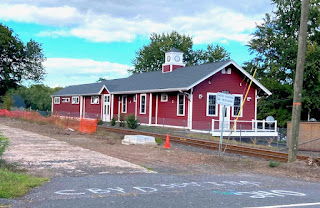 The silos were part of a huge iron foundry famous for its bookends and decorative plaques. This is an aerial from a few years back - much of this is now demolished. 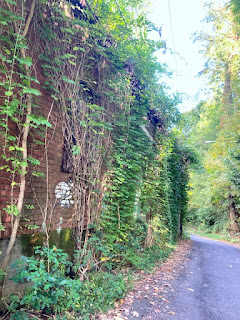 "A succession of industrial buildings stood beside the Connecticut River in Rocky Hill from 1835 to 1881, when a huge foundry was built by ownership subscription. In 1918, that building burned down. The present building was erected in 1919 by the Connecticut Foundry Co., established by A. O. Knudsen, Arthur Enquist and Ernest Spencer. The company remained in business until 1983, when it closed on March 30.

The company made a wide variety of items of cast iron, from range oil burners, piston-ring moldings and lawn mower parts to bookends and decorative plaques. Those who designed and made the molds were not only artisans, but artists as well. The company’s customers included such well-known corporations as Stanley, Dictaphone, Remington Rand, GE and numerous others.  Source

Historical Photos of the Railroad Station